Ostric­h meat has a lot iron, is more nutrit­ious than beef or mutton and is known to known to lower choles­terol levels­
By Owais Qarni
Published: February 10, 2019
Tweet Email 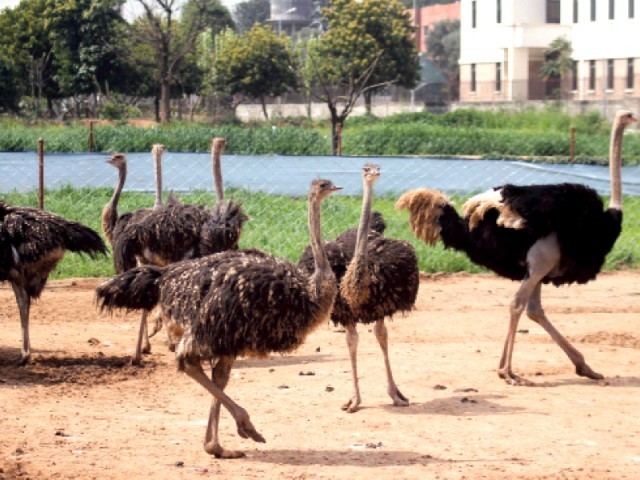 MULTAN: Ostrich farming in the country has failed to live up to its potential. With help from the government, ostrich farming can rake in a considerable amount of money. However, a lack of breeders and high running costs are major factors contributing towards making it remain an untapped goldmine.

Native to the deserts of Africa, ostriches are found in Australia, New Zealand and some Asian countries. At a towering six to eight feet tall, these leggy creatures are the supermodels of bird species.

Breeders in Pakistan import the birds from South Africa, Belgium and Australia. The price of a one-month-old ostrich is approximately Rs15,000 to Rs17,000. Ostrich farms are usually set up in larger, open spaces. Each bird needs about a marla of land and requires 24/7 supervision. A grown ostrich weighs between 80 kilogrammes to 100kg. With proper care and nutritious feed, the bird can also weigh up to 130kg. They typically feast on grass, corn and spinach, consuming 2.5kg of food per day.

Farmers in South Punjab breed ostriches professionally and are in contact with famous growers from around the world via social media. However, the main problem in ostrich farming is marketing which ultimately affects the rate of consumption. However, both issues can be solved with a little help from the government.

Currently, ostrich meat is only sold in big hotels and restaurants as a barbeque dish or incorporated into karhai. By opening shops that sell ostrich meat in every city and by inviting businessmen to participate in such a venture, the government can help market the business, thereby making its consumption a part of the norm.

Ostrich meat has a lot of iron and is more nutritious than beef or mutton. One study highlights that consuming about six kilogrammes of ostrich meat per month is known to be beneficial for those suffering from cardiac diseases, diabetes and high blood pressure. Consuming ostrich meat is also known to lower cholesterol levels.

Despite this, ostrich breeders do not receive any relief or cooperation from the government. Some of the steps the government can take include running advertising campaigns regarding the use of ostrich meat and its health benefits. In this regard, doctors and clergymen can remove preconceived notions some individuals have about ostrich meat; many believe that consumption of ostrich meat is forbidden in Islam.

Speaking to The Express Tribune Zeeshan Khwaja, the pioneer of ostrich farming in Multan, said that many ostriches die due to the negligence of the livestock department. “The second problem is that a lack of proper marketing means low profits,” he said.

The government does not provide breeders with a subsidy. As a result, many face financial losses at the start, he added. “The Ostrich Farming Association was established at the start of the year. The union wrote a letter to Prime Minister Imran Khan, asking that the government facilitate ostrich breeders. However, their demands were paid no heed,” he maintained. He stated that the government should make an agreement with Saudi Arabia and improve the system of importing the birds.

Ostrich Farming Association President Rana Khalid said that a maximum amount of profit can be earned from this business if the government pays due attention and addresses farmers’ grievances.