Govt decide­s to those saplin­gs that can grow in dry areas
By Mohammad Zafar
Published: February 10, 2019
Tweet Email 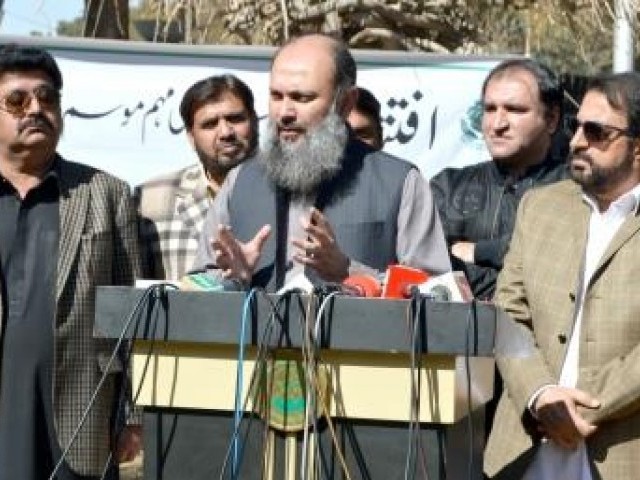 “In the first phase of the tree plantation drive 80,000 trees and saplings are being planted today across the province and during this spring season 1.2 million trees will be planted, which definitely would create a positive impact on our environment,” CM Kamal said while talking to reporters after planting a sapling at Chief Minister Secretariat to kick off the drive in the province.

“The government has plans to plant more trees in areas having good rainy seasons but we have also decided to plant species that can be grown in dry areas with less water.” Kamal said, adding that the provincial government was taking steps for environmental protection.

He said his government had decided to introduce a new Forest Act because the earlier law was over 100 years old and the department had not set its direction during the period.

“We have a complete scheme regarding the current tree plantation drive and its sustainability, and we are focusing on how to expand our forests.”

To a query regarding previous campaigns, Kamal said, “We can see saplings planted by previous chief ministers but we want to change the precedents. We have decided to plant trees and saplings on patches of 100 or 200 acres that should have a positive impact on the environment of the province.”

He said, “The first meeting of environmental council was held during our tenure and unfortunately the province was under grip of drought for the past three years. As we all know, we can’t plant trees in all seasons because they can better grow in spring.”

The chief minister said that after the recent rains the province had a suitable season for plants and trees to flourish.

Kamal said Pakistan is in a better situation as compared with other countries affected by climate change and in Balochistan there is less carbon emission because of fewer industries.

Kamal said the provincial government will sign a memorandum of understanding with the Space and Upper Atmosphere Research Commission (Suparco), which has the capability of identifying suitable land for agriculture through real-time data of satellite imagery.

“Keeping in view the level of water ascertained with Suparco’s help, we can make irrigation plans for Balochistan, including identification of areas suitable grazing. It was an initiative of our government that will yield long-term positive environmental impact for Balochistan.”

Replying to a question, Kamal denied presence of land grabbers in provincial coastal strip, saying the region was deserted, but the government and National Accountability Bureau (NAB) had launched an inquiry against illegal settlements in Gawadar.

Chairing a meeting on the performance of the Education Department, CM Kamal said the provincial government has released funds for educational development and the authorities should ensure an effective system of attendance for teachers and students.

“In all, 14,250 primary schools exist in Balochistan, of which 1,623 boys and girls schools were non-functional due to various reasons, while following action against ghost teachers, 16 teachers were sacked for remaining abest from duty,” the secretary informed the meeting, adding that the salaries of such teachers were being deducted.

The government of Balochistan has declared mandatory the education department’s approval for establishing new schools, while deciding to take experts’ assistance during construction of the schools.

Lehri said Balochistan was the only province in the country where the GIS Profile System was fully functional and the department had complete data of all enrolled children, while ensuring the attendance of teachers and students through the RTMS.

Chief Minister Kamal ordered revival of educational activities in all non-functional schools and said new appointments must be started in accordance with the cabinet’s guidelines to reopen schools closed due to lack of teachers.

“The government has been paying special attention to educational department after declaring an educational emergency and deciding that there will be no compromise in the sector in Balochistan.”

CM said there should be at least one Model High Schools in each district along with an information technology lab and a hostel.

“The education department should focus on a teachers’ training programme,” he added.