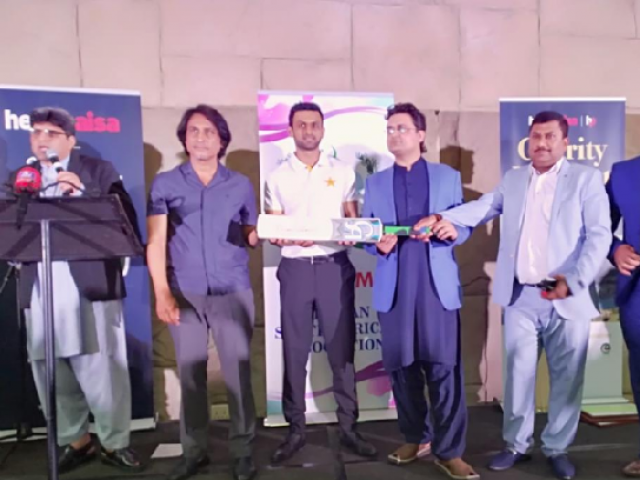 ISLAMABAD: An autographed cricket bat and ball of Prime Minister Imran Khan has been auctioned in South Africa for raising funds for the construction of new dams in the country.

The autographed Bat and Ball signed by Prime Minister @ImranKhanPTI was auctioned at 0.3 million Rand and 70 thousand Rand for donating to #PMCJFUND. Special tribute is paid to Supreme court and CJ Saqib Nisar for initiating Dam Fund. Through which 9.6bl has been raised till now pic.twitter.com/iaKcwvLuzD

The Pakistani community in South Africa donated Rs37 million for dams fund in the biggest fund raising event ever organised by the overseas Pakistanis on Tuesday.

The national cricket team’s signed bat had also been auctioned for 15,0000 Rands.

Speaking at the occasion, the chief guest, PTI Senator Faisal Javed,  thanked the expatriate community for generously donating in the dam fund.

We are absolutely energized to have overseas support again for Diamer Basha and Mohmand Dam.Pakistani Community in South Africa has contributed Rs.37000,000 Senator @FaisalJavedKhan thanked Pakistani community for their generous and passionate support for the National cause#PTI pic.twitter.com/rFsgSVwpyO

He said that “with this passion, Pakistan could overcome every challenge”.

“We all have to work hard together to steer the country on the path of progress,” he added.

The PTI senator went on to say that it had been more than 40  years now, not a single dam was built and presently, the country has the water storage capacity of one month only.

Faisal said that the Diamer-Bhasha and Mohmand dams will help to solve the water crisis in the country.