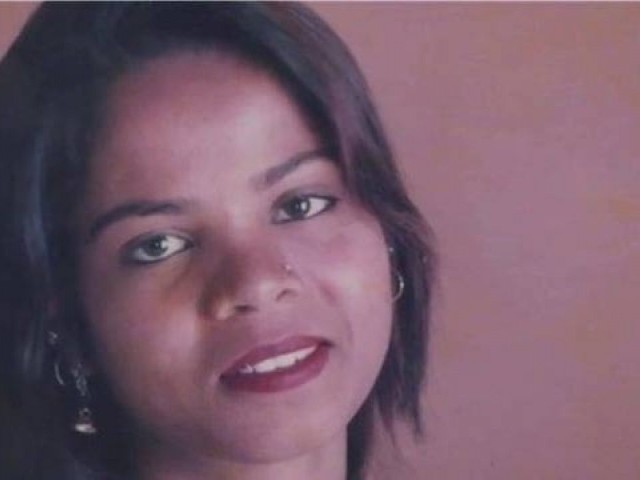 Bibi, a farm worker, was convicted in 2010 of making blasphemous remarks, which was overturned in October by the Supreme Court. The petition sought review of her acquittal. “On merit, this petition is dismissed,” Chief Justice Khosa said in the court. The petitioners had failed to point out any mistake in the original [SC] judgment, he added.

The hearing continued for more than two hours. Petitioner Qari Muhammad Salaam’s lawyer told the court that the case of Bibi’s acquittal was a matter concerning the Ulema, therefore, religious scholars should be called to present their viewpoints.

During the proceedings, the chief justice asked the counsel for the petitioner to first point out a single flaw in the Supreme Court judgment regarding Bibi’s acquittal before a larger bench could be formed on the matter. However, the lawyer failed to do so.

Referring to first information report (FIR) lodged in the case that formed the basis for Bibi’s prosecution, chief justice Khosa said: “An FIR lodged five days after an incident is suspect,” adding that testimonies also differed in their account regarding the size and the place of the crowd which had gathered following the blasphemy accusation.

The lawyer countered that late registration of an FIR did not necessarily mean ill-intention. “Should we then hang an accused on the basis of such testimonies,” questioned the chief justice.

At the end, Justice Khosa asked the complainant’s counsel to assist in deciding what should be the punishment for those witnesses who made the false statement. The chief justice said that under the law, the false witnesses in such cases should be awarded life imprisonment after a summary trial.

He expressed frustration at a furious reaction to the case. “Is this the face of Islam that we want to show to the world?” the chief justice said. “You block the entire country because a decision is not in your favour?” he told the court. “We have to protect our minorities, we have to take them together, this is the beauty of Islamic society,” he stressed.

The chief justice told the petitioner’s lawyer that “we are hearing the case at length for the satisfaction of those who issue fatwas without reading the verdict”. The hearing lasted nearly two hours and 45 minutes, during which both the prosecution and defence presented their points of view over the conviction.

Moments after the ruling was announced, Bibi’s lawyer Saif-ul-Mulook hinted that his client’s departure from the country was imminent. “I think at this time she is here (in Pakistan) – but by tonight, I don’t know,” he told reporters outside the court.

Malook said that the judges not only “accepted her appeal [but] they today have dismissed the review case” as well. “Although the law is settled on the view that only the error apparent on the face of the record can be reviewed and this is settled by now by the Supreme Court’s previous judgment that the review is not a rehearing of the case.”

Ghulam Mustafa Chudhary, the lawyer for the petitioner, told reporters: “Since our witnesses are truthful, bad intention has not been proven against any of our witnesses. If the accused has been freed it is not because of false testimony from our witnesses, but she has been acquitted by giving her the benefit of doubt.”

Members of civil society, including politician Farhatullah Babar, were in attendance during the proceedings. Unlike previous hearings, a few religious clerics were also present inside and outside the courtroom. Outside the court, security in the federal capital was on high alert as the Islamabad administration deployed the paramilitary Rangers.

Bibi, the 51-year-old Christian woman, was on death row since November 2010 after she was convicted of committing blasphemy during an argument with two Muslim women in Sheikhupura. Her case gained prominence after then Punjab governor Salmaan Taseer pleaded for a retrial of her case and was subsequently shot dead in 2011.

Bibi challenged the verdict in October 2014, however, the LHC upheld her death sentence. The Supreme Court stayed the execution in July 2015. After a three-year hiatus, a three-judge special bench, headed by then chief justice Mian Saqib Nisar, and comprising Justice Asif Saeed Khosa and Justice Mazhar Alam Miankhel, heard her appeal.

On October 31, 2018, the apex court acquitted her. The 56-page verdict set aside the Lahore High Court (LHC) verdict and directed authorities to release Bibi from prison.

With inputs from agencies