AJK presid­ent says it is collec­tive respon­sibili­ty to raise voice for people across LoC
By Mamir
Published: January 28, 2019
Tweet Email 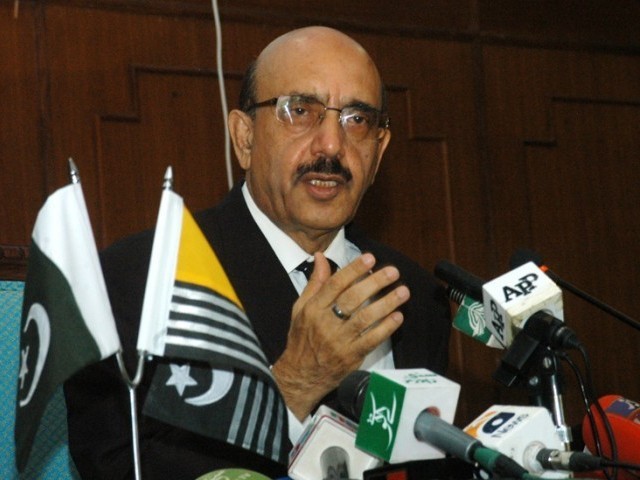 MUZZAFARABAD: Azad Jammu and Kashmir (AJK) President Sardar Masood Khan has urged journalists to exercise their professional capacity to effectively highlight the worst-ever atrocities unleashed by Indian army in occupied Kashmir apart from using their pen and camera to ensure rule of law.

He was addressing a gathering of senior journalists at a dinner hosted by him in the honour of newly-elected office bearers of Central Press Club on Sunday.

The president said collaborative efforts by the government, media and civil society were need of the hour to alleviate the sufferings of those living under the shadow of unrelenting violence, suppression, and coercion.

“It is our collective responsibility to raise voice for our brothers and sisters living across the Line of Control (LoC) who were being killed, injured, and blinded for life — for demanding their legitimate right to self-determination,” stressed Masood.

Referring to the black day, the AJK president pointed out that India had achieved independence from a colonial power, but she had herself become a colonial power by occupying a major portion of the state of Jammu and Kashmir against the will of its inhabitants.

“A country, which has illegally occupied a territory at the strength of its military might and has been brazenly trampling all basic and fundamental rights of the people living therein has no right to celebrate the republic day,” he said.

He sought international community’s role to stop India from inhuman treatment of Kashmiri people in IOK. The president maintained that state sponsored terrorism, war crimes and gross violations of human rights by Indian occupation forces should be a matter of serious concern for the entire humanity.

President Masood also felicitated the newly-elected office bearers of the press club. He expressed hope that the journalist body under its new leadership would play a significant role for promotion of objective and ethical journalism — resolving the problems being faced by media fraternity.

Earlier, CPC President Tariq Naqash introduced club members to AJK president and expressed his gratitude to him for showing keen interest in resolving the problems being faced by the media community.

He said it was heartening for the journalists to have someone in the highest constitutional office of state who had started his practical life as a correspondent and broadcaster.

“Your penchant for journalism and your strong connections in the country’s top-tier policy making institutions raise our hopes that not only it will help us augment the capacity of local media persons but also resolve their fiscal woes,” said Naqash.