In South Punjab, 39 electr­icity feeder­s were suspen­ded due to the recent rainy spells­
By APP
Published: January 22, 2019
Tweet Email 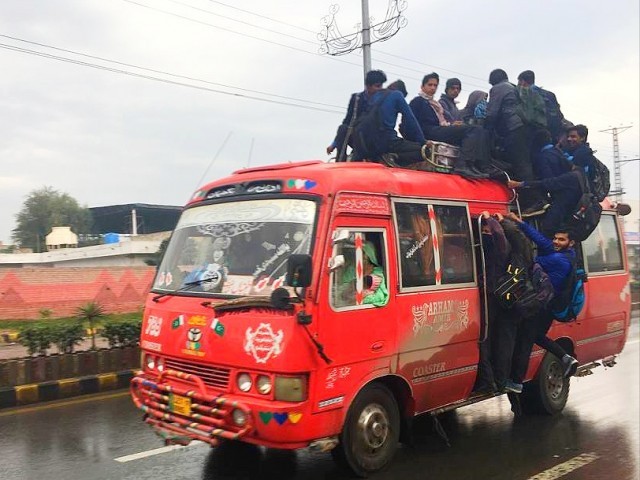 School children travel in a van during rain in Lahore: PHOTO: EXPRESS

The weather in Lahore and other cities of the province took a turn for the cooler after a continued moderate to heavy spell of intermittent rain started on Sunday.

According to the Meteorological Department’s forecast on Monday, intermittent rainfall is likely to persist till Tuesday (today) noon in Lahore.

Azam Ch Saroya of Kissan Forum told APP that wheat crop output would increase as a result of the current rains in the province.

Similarly, Bahawalpur received heavy rain at night between Sunday and Monday which dropped the mercury. Heavy showers with thunderstorms lashed Bahawalpur and adjoining area on Sunday night. As a result of the rain, the weather turned cooler, prompting locals to stay indoors. The city was also plunged into darkness as a power breakdown was reported soon after the rain started. Several areas of the city were still deprived of electricity supply.

In South Punjab, as many as 39 electricity feeders were suspended in different areas due to the recent rainy spell.

According to Multan Electric Power Company (MEPCO) sources, most of the feeders were located in Rahim Yar Khan and different teams of the department were working to restore power supply.

Chief Executive Officer MEPCO Muhammad Akram Chaudhary was supervising the operation for power restoration and hoped that the supply would be restored by the evening. The local met office had forecast partly cloudy weather with chances of light rain for the city and its suburbs during the next 24 hours.