After being remove­d from Lighth­ouse Market­
By Kashif Hussain
Published: January 19, 2019
Tweet Email 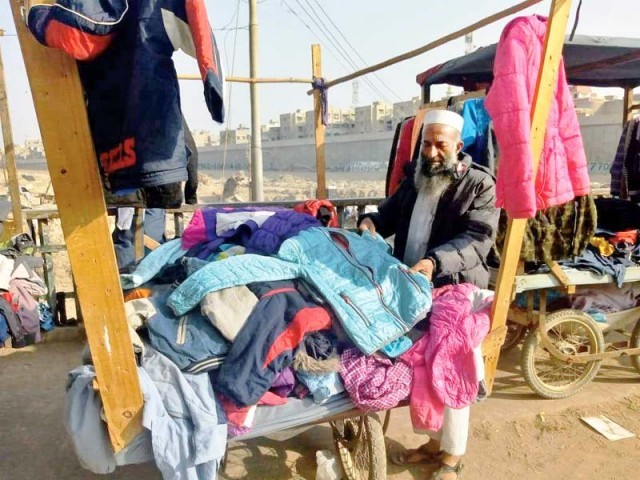 A displaced vendor of Lighthouse takes a make-shift stall to roads and intersections. PHOTO: EXPRESS

KARACHI: Shopkeepers and vendors who were removed from Lighthouse Market, a space popular for used clothes and footwear, after its demolition have simply moved their make-shift stalls to busy roads and intersections across the city.

Amar and Danish, who sell used jeans and shirts at Teen Hatti said that the anti-encroachment drive had created unemployment among the youth. They said that they sift warehouses and collect used jeans, get them washed and package them to sell on streets. The jeans purchased from warehouses, after dry cleaning, cost around Rs80 to Rs100 which are sold for Rs200 on the pushcarts. They added that they earn daily wages between Rs600 and Rs800.

According to the Traders Union Chairperson Hakeem Shah, action against encroachments began just as the winter season rolled in. Many of those involved in the business of old warm clothes stock up the items over the year and categorise it. The beginning of the operation at the turn of winter season had greatly affected their business. He added that the poor had suffered the most.

With the prices of new items going beyond the purchasing power of the low-income and the middle-class, people head towards street vendors to buy used jackets, sweaters and shoes to combat the winter season.

The used goods fulfil 50% of the country’s demand for clothes and footwear while the rest are exported to South Africa, Thailand, Iran and Afghanistan. Shah said that this industry that caters to the poor segments of society has also become a source of revenue for the government. He said that Pakistan was the only country where there’s duty imposed on import of used, cheap clothes, footwear and other products. He said that during the past 10 years, the duty per container had increased from Rs65,000 to around Rs3.5 to Rs4 million. He added that previously, duty was imposed on all the products however now footwear, clothes, leather items, kitchen utensils and other items were taxed individually.

Importers of used items said that during the past five to six years the prices had risen by 100% due to an increase in duty and taxes. They added that the quality of the used items, irrespective of price factor, had also decreased.

This is because Pakistan mostly imports clothes and old items from the United States of America, United Kingdom, Germany, Belgium, Japan, Korea and Far East countries and due to their struggling economy, the people in the developed countries take the maximum use they can from the items before disposing them.

Pakistan is one of the largest importers of used clothes, footwear and other items. In 2017, the country imported around US$240 million of goods officially and more than US$200 million via smuggling through Afghanistan. However, the latter includes household items, furniture and electronics products as well.  This industry was already suffering before the anti-encroachment operation. Shah said that by making other items and used products costly, the Chinese were benefitting the most. He said that while used products were quality items, Chinese products are substandard. However, due to the increase in taxes and the rate of dollar, people were opting for Chinese products. He said that Chinese products were ruling the Pakistani market.

It is important to note that the rich also purchase used clothes imported from Europe. The Mashrique Centre near National Stadium with around 200 shops provides a wide collection of branded shoes, jackets, uppers, hoodies and trousers. The air-conditioned market houses special stock for the wealthy for which they charge good money. Used clothes are often sold online now as well. There are countless websites selling used clothes, footwear at 3% more than the market price. Given the case, there is a need to address the problems created by the anti-encroachment operation to sustain the industry through difficult times.