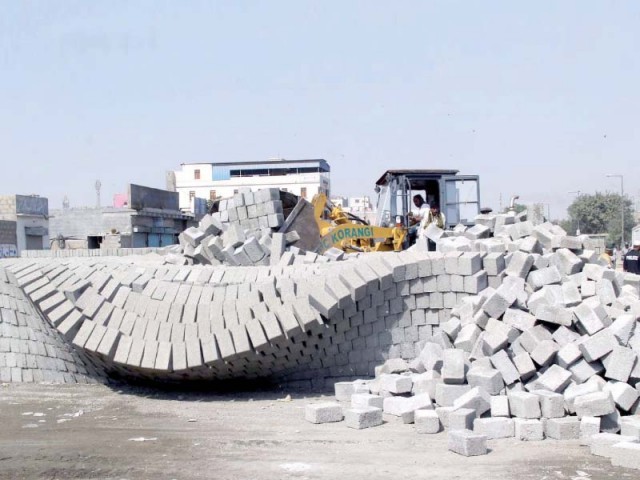 Extractors remove blocks of cement as part of the anti-encroachment drive in Korangi, under the supervision of KDA, on Wednesday. PHOTO: PPI

KARACHI: More than 300 shops and warehouses built on drainage lines in Korangi no. 5½ were demolished by heavy machinery during the anti-encroachment operation by Karachi Development Authority (KDA) on Wednesday.

The operation was conducted under the supervision of KDA Director-General Samiuddin Siddiqi.

Estate and Enforcement Director Dildar Shah said that the KDA estate and enforcement department’s squad was carrying out an effective operation indiscriminately against the illegal occupants.

The Supreme Court ordered anti-encroachment is under way across the city. More than 300 shops, warehouses and concrete buildings were demolished in the presence of law enforcement agencies (LEAs), while expanding the scale of the anti-encroachment operation.

Shah said, “We cannot do anything to stop people from going near the rubble. The boy who died by the collapsing rubble was a garbage picker. What we can do to avoid accidents is the immediate clearance of debris”. He added that the process of clearing debris was facing delay due to the late provision of funds by the Sindh government.

Around 350 shops and warehouses were demolished in the same area a few days ago and an Afghani garbage picker was killed when rubble fell over because of which the operation was suspended.

The citizens appreciated the anti-encroachment operation and demanded that authorities and KDA officials clear the rubble and provide an alternative place. They suggested that a strategy be devised for the immediate removal of debris which causes air pollution and severely affects the flow of traffic and increases the risk of accidents.

On the other hand, another anti-encroachment operation headed by Anti-Encroachment Department Senior Director Bashir Siddiqi was conducted in South district. Illegal buildings at Neher-e-Khayam in Clifton, Block 5 were demolished. The operation was carried out spanning an area between Nasir Jump Road and Chamra Chowrangi and illegal shops, cabins and stalls were demolished. Karachi Metropolitan Corporation (KMC) had issued notices to welfare organisations to remove encroachments from footpaths in North Nazimabad and Bufferzone in Central district.