Many Saudis condem­ned Qunun for what they descri­be as dishon­ouring her family­
By AFP
Published: January 9, 2019
Tweet Email 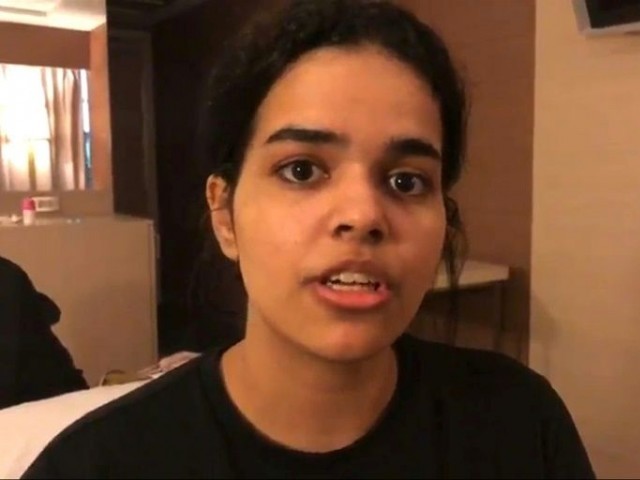 This screen grab from a video released to AFPTV via the Twitter account of Rahaf Mohammed al-Qunun shows a still of Qunun speaking in Bangkok on January 7. PHOTO: AFP

Rahaf Mohammed al-Qunun, 18, arrived in Thailand at the weekend after fleeing what she called an abusive family in the deeply conservative kingdom and staved off deportation after her tweets drew global attention.

Qunun’s impassioned cry for help set off a media frenzy, prompting angry denunciations and death threats from many in a kingdom where guardianship laws are still widely supported.

But the incident sparked a rare online debate as several young Saudis — including men — implored authorities to dismantle the guardianship system.

Seen as a form of gender apartheid, the system means Saudi women are often only as free as their male “guardians” ?- husband, father and other male relatives ?- allow them to be. The men in their lives have to give formal permission for the women to study, get married or even renew their passports.

“He can control her, slap her, beat her, do whatever he wants and no (government) agency can stop him.

“This is causing women to dream about living elsewhere, away from where they were born and raised. Why? Because living here suffocates them.”

As tweets by Qunun, now in the care of a UN refugee agency in Thailand, went viral, a new hashtag gained traction in Saudi Arabia: “Drop guardianship or all of us will migrate”.

“Saudi society, in general, has utterly failed to come to terms with the reality that women have an equal desire for self-actualization,” tweeted another Saudi man, Ahmad Nasser al-Shathri.

“The notion that a women’s innate desire is to be a homemaker is crippling our societal growth.”

The backlash follows a wide-ranging liberalisation drive spearheaded by Crown Prince Mohammed bin Salman that is aimed at transforming the conservative petro-state, long criticised for its treatment of women.

His reforms include the much-celebrated decision overturning the world’s only ban on female motorists last June, allowing women to attend soccer games alongside men and take on jobs that once fell outside the narrow confines of traditional gender roles.

Catalysed in large measure by what experts call economic pain owing to a drop in oil prices, the reforms have introduced a series of firsts in the Saudi labour market, where women have a miniscule presence.

For the first time, women are seen alongside men in music concerts and social gatherings, amid the waning influence of the once-feared religious police, which strictly segregated the genders.

But while transforming the lives of many women, this reform drive will be cosmetic for many others until the kingdom abolishes a system that gives men arbitrary authority over their female relatives, critics say.

“The social reforms in Saudi Arabia are very much real and they will improve the everyday lives of women,” Bessma Momani, a professor at Canada’s University of Waterloo, told AFP.

“But the guardianship system remains repressive and hinders women’s rights and mobility.”

Women’s empowerment is a potential social lightning rod in the deeply traditional society of Saudi Arabia.

Officials close to the government say they are seeking to dismantle the system piecemeal to prevent any backlash from arch-conservatives.

Women inmates are often reported to be stuck in prisons after completing their terms because they were not claimed by their guardians.

One Saudi woman told AFP how she was stuck in limbo, unable to even renew her passport, when her father, her only male guardian, slipped into a coma after an accident.

Many Saudis condemned Qunun for what they described as dishonouring her family.

But as she galvanised international support in a Twitter-led campaign, many others voiced solidarity — especially after the Saudi charge d’affaires in Bangkok was caught on tape telling Thai authorities they should have confiscated Qunun’s cellphone.

“It is challenging for the crown prince to completely dismantle guardianship laws because of religious conservatives who have a vested political interest to remain relevant in a changing Saudi Arabia,” said Momani.

“That said, social pressure from young people like Rahaf, who find the reforms glacially slow … may prove more of a political challenge than the religious conservatives.”

Iran’s Khamenei: some US officials are ‘first-class idiots’