CDA direct­ed him to purcha­se saplin­gs and plant them as compen­sation­
By Our Correspondent
Published: January 2, 2019
Tweet Email 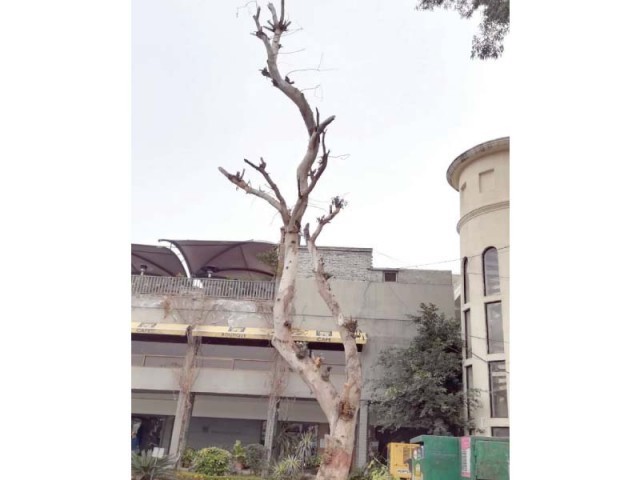 ISLAMABAD: The Capital Development Authority’s (CDA) Environment Wing on Tuesday imposed a Rs10,000 fine on a man for illegally chopping off a half-a-century-old Eucalyptus tree within the Super Market in sector F-6.

On Tuesday, former secretary of the climate change minister Syed Abu Akif posted in a WhatsApp group for those working on the environment in the federal capital that a 50-year-old tree on School Road in Sector F-6 was being chopped.

Soon after, another officer of the climate change ministry shared pictures of the tree being cut. Some members of the civil society went to the spot and stopped the act while they summoned officials of the CDA’s environment wing.

At this, the civic authority of the city sprung into action and stopped the felling. However, by that time, around 50 per cent of the tree had been cut.

CDA Environment Wing East Director Irfan Niazi said that Salman Ajmal, the owner of Juniper Arcade, had allegedly stripped the entire tree of foliage because it was allegedly obscuring the facade of his building and was apparently affecting his business.

Niazi said that the CDA Environment Wing responded to the situation and not only fined Ajmal for violating CDA’s by-laws but also directed him to provide plants for alternate plantation as compensation for the maimed tree. “He [Salman Ajmal] realised his mistake and along with submitting the fine bought 100 Pine tree saplings worth Rs25,000 and handed them over to the CDA for alternate plantation,” Niazi stated.

He added that around seven months ago, Ajmal had approached the CDA, seeking permission to prune the tree. He further said that nobody was allowed to trim extra tree bushes and leaves from trees in the federal capital since it was the task of the CDA.

Niazi added that the way Ajmal had denuded the tree was unacceptable and that CDA would take requisite action every time such anti-environment activities take place since plants were significant for environmental conservation.