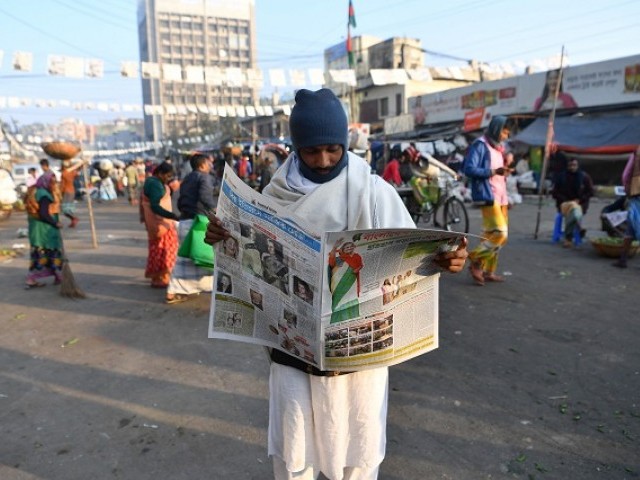 A Bangladeshi man reads a newspaper carrying headlines of the general election results in Dhaka on December 31, 2018. PHOTO:AFP

DHAKA: Bangladesh’s election chief on Monday rejected calls for a new election after widespread opposition claims of rigging in a weekend vote which Prime Minister Sheikh Hasina won by a landslide.

The opposition has demanded a rerun, saying Sunday’s election was marred by massive irregularities including voter intimidation, ballot box stuffing and a crackdown on Hasina’s opponents.

Chief Election Commissioner K.M. Nurul Huda said the polls were carried out “successfully” as 80 percent of the 104 million voters turned out to cast ballots.

“We are not going to hold a new election. There is no scope to hold a fresh one,” Huda told reporters.

“If some isolated incidents took place at any (polling) centres we have to probe it. We didn’t receive any complaint of irregularities yet. We will probe if any come,” he said.

Hasina’s Awami League and its allies won 288 of the 300 seats in the election and the ruling party called the opposition complaints “irrational”.

“We reject their claim and humbly request them to withdraw their statement,” a party spokesman said.

The polls were marred by violence which left at least 17 dead during clashes between rival parties and with police.