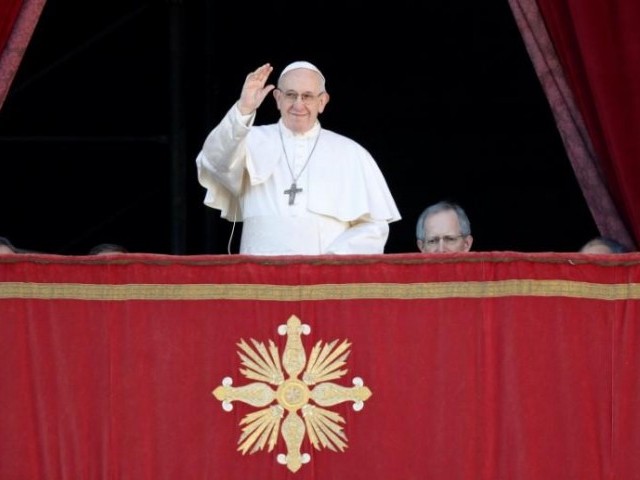 Pope Francis waves as he arrives to deliver the "Urbi et Orbi" message from the main balcony of Saint Peter's Basilica at the Vatican. PHOTO: REUTERS

VATICAN CITY: Pope Francis used his Christmas message Tuesday to appeal for peace in conflict zones such as Syria and Yemen, whose populations face some of the world’s worst humanitarian crises.

The pontiff said he hoped a truce in conflict-ravaged Yemen would end a devastating war which has killed around 10,000 people since 2015 and pushed 14 million Yemenis to the brink of famine.

Pope to make Vatican changes in push for reform, transparency

“My thoughts turn to Yemen, in the hope that the truce brokered by the international community may finally bring relief to all those children and people exhausted by war and famine,” he said.

The Pope also evoked the war in Syria, from where US President Donald Trump has decided to pull out some 2,000 troops in a controversial decision, arguing that the Islamic State has been defeated.

Pope urges end to ‘carnage’ in Syria in Easter message

“May the international community work decisively for a political solution… so that the Syrian people, especially all those who were forced to leave their own lands and seek refuge elsewhere, can return to live in peace in their own country,” he said.

He also said he hoped for renewed peace talks between the Israelis and Palestinians “that can put an end to a conflict that for over 70 years has rent the land chosen by the Lord to show his face of love.”