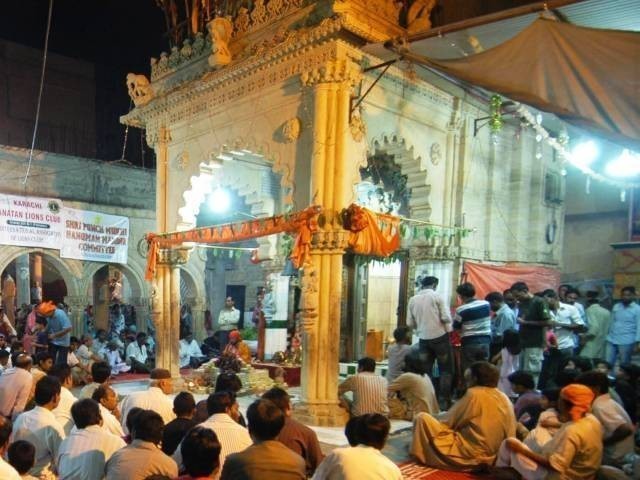 ISLAMABAD: The Hindu community in the federal capital has decided to build a temple in the city so that members of their community can perform their rituals easily.

In this regard, the federal capital’s Hindu community has sought help from the city’s arguably most powerful resident, Prime Minister Imran Khan.

The decision to build the temple was taken at a Hindu panchayat which convened a special session on Thursday at a local hotel in the city. The session was chaired by panchayat president Pritam Das and saw participation from some illustrious Hindu lawmakers such as Pakistan Tehreek-e-Insaf (PTI) minority MNAs Dr Ramesh Kumar Vankwani and Lal Chand and National Party Senator Ashok Kumar.

The Hindu Panchayat’s president said that an estimated 3,000 Hindu families live and work in the federal capital, including some who are associated with the civil bureaucracy, health and medicine sectors and working in other fields apart from hosting a sprinkling of Hindu diplomats.

Das pointed out that the former government had allotted four kanals of land near the graveyard in Sector H-9 for the construction of the temple.

Now, he said, the government and the Capital Development Authority (CDA) have issued the requisite no-objection certificate (NOC) for construction of a temple at the site.

Even though the Hindu community living in the federal capital will be expected to actively participate in the construction of the temple, Das bluntly said that they did not have the resources required to build the temple.

For this purpose, he outlined his plan to meet with Prime Minister Imran Khan.

“We will inform him (Imran) about all the details that our community does not have the resources [to build the temple] and that we expect that the government to help us in building the temple so that we can perform our rituals comfortably,” he said, adding that they have thus far collected around Rs1.5 million in donations and grants which will be used to fund the boundary wall of the temple.

Das, however, clarified that they did not require ‘financial aid from any country.”

“On the contrary, we wish that the Hindu community living in Pakistan take an active part in the construction of the temple,” Das said, adding that the layout plan for the temple and all development work on the structure will be performed by Pakistanis.

This temple, though, is not the first Hindu temple lying within the boundaries of the Islamabad Capital Territory (ICT). The first one was the temple in the picturesque Saidpur Village in the Margalla Hills.

The temple here dates back several centuries to the reign of Mughal Emperor Akbar by Raja Man Singh. The temple had been restored by the CDA in 2006 with support from the French government. A Sikh Gurdwara is also located in the historic village.

Das was ostensibly asked about the need to build a new temple in the city despite the presence of the temple in relatively remote Saidpur Village.

The Panchayat president explained that the temple in Saidpur was actually a Dharamshala (a religious sanctuary) meant to educate Hindu and Sikh children of the area.

Building a temple in the centre of the federal capital, however, will serve all the needs of the Hindu community in the city since it will also include a community education facility and a cremation ground.

An auditorium will also be built within the temple grounds to host different events for the community.

“We wish that PM Imran lays the foundation stone for the temple. We want to be supported in the same way the government is supporting the Sikh community,” he added.

The session also discussed the issues and problems faced by the Hindu community in various parts of the federal capital.

The session’s participants maintained that Pakistan was as much their country as any other citizen and that they had high hopes from the incumbent PTI government.

Special religious rites for peace in the country were also performed during the session.