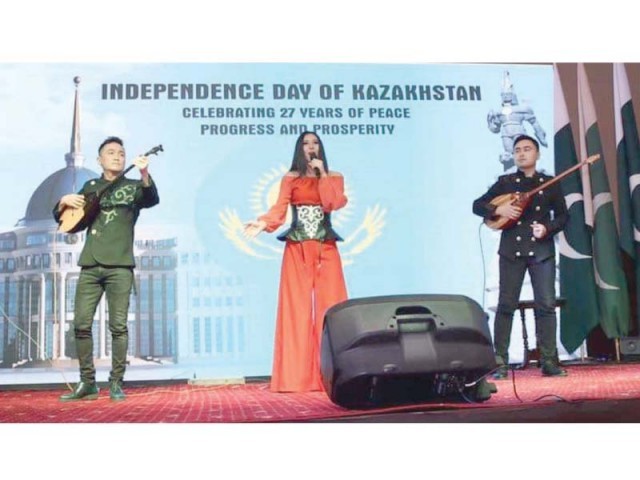 Beautifully decorated venue coupled with traditional Kazakh cuisines ostensibly added color to the event. A musical performance by Kazakhstan artists was yet another feature of the event that greatly entertained the audience.

Federal Minister of Maritime Affairs Ali Zaidi who was the chief guest on the occasion, continued to praise the mesmerising performances of the artists, when he came on the podium to deliver his remarks.

The minister rightfully thanked the Kazakhstan Ambassador for bringing the music group to Pakistan and thus providing people with a chance to enjoy splendid Kazakh songs.

Ambassador of Kazakhstan also spoke on the occasion. He thanked the audience for attending the function in a large number.

While giving an abridged account of bilateral relations, the ambassador said in 27 years of independence, poverty in Kazakhstan has been reduced to 2.7 per cent in 2017, the literacy rate is one of the highest in the world and the country is also one of the biggest oil suppliers in the world.