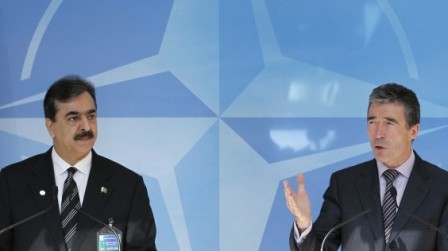 BRUSSELS: NATO and Pakistani leaders agreed Friday on the need to strengthen their political ties, even as they face an increasingly bloody military struggle with al Qaeda and Taliban fighters.

“We have not only to confine (our cooperation) to only terrorism and extremism,” Gilani told a joint press conference, referring to the fight against Islamist insurgents in the Afghanistan-Pakistan border area.

“We have to look beyond that so that we can work together in future as well… there should be more cooperation with the parliamentarians and with high level exchange of visits,” he added. “It has to be a process that is demand driven,” said Rasmussen, adding: “We have already started military-to-military cooperation and we stand ready to further develop that,” he stressed.

But “we should expand the political dialogue, personally I attach a lot of importance to dialogue with the parliaments,” he added, echoing his Pakistani guest. Rasmussen said Pakistan should define the area where the NATO alliance can offer its support.

NATO and Pakistan have been fighting Islamic militants in the border region in a sometimes brittle relationship which has till now been largely limited to military contact. Both said they were ready to continue the military efforts.

“Pakistan is determined to win against the evil forces of extremism and terrorism,” said Gilani. “Defeat in this war is not an option for us,” he added, offering his appreciation of NATO’s role in Afghanistan.

Rasmussen underlined that “NATO will stay in Afghanistan as long as it takes to finish our job. There should be no misunderstanding about that. “We count on Pakistan as a partner and we will be a a partner to Pakistan as well.”