Cleric arrested on complaint of student’s father in Hyderabad

Cleric arrested on complaint of student’s father in Hyderabad 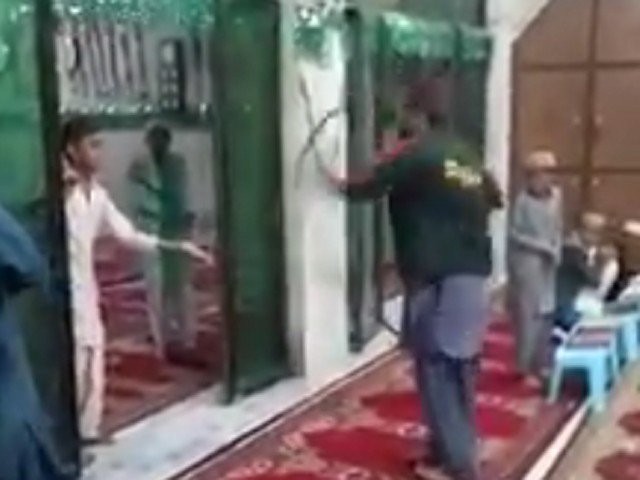 HYDERABAD: A cleric of a mosque in Hyderabad has been arrested and booked in an FIR allegedly for punishing students over their absence. The police geared into action after a video which recorded the incident went viral on social media.

Sindh Chief Minister Syed Murad Ali Shah and Sindh Inspector-General of Police (IG) Syed Kaleem Imam took notice and directed the district police to take action and submit a report. “We can’t tolerate physical punishment meted out to children in any shape and at any place,” warned Shah.

He directed the Sindh Education Department to coordinate with the Religious Affairs Department and design a counseling programme for clerics. In the video, the cleric, Qari Shabbir Ahmed, can be seen thrashing children with a thick rubber belt.

The person recording the video intervened and requested Ahmed to stop beating the students but Ahmed refused while telling him to go for prayers and not intrude. A child, when asked about the reason for the punishment, said that students who had remained absent for one to two days, were being beaten up.

The incident took place in Sarhindi Mosque in Masoom Shah Colony, in the limits of Cantt Police Station. Hyderabad Senior Superintendent of Police (SSP) Sarfaran Nawaz Shaikh said that he immediately directed the Cantt police to arrest the suspect after watching the video on social media.

Later, the Cantt police also registered an FIR on the complaint of student Shahzeb’s father, Ahmed Jan, under section 328-A of the Pakistan Penal Code. The section, which was inserted through the Criminal Law Amendment Act 2014, provides for imprisonment of one to three years after conviction, besides a fine.