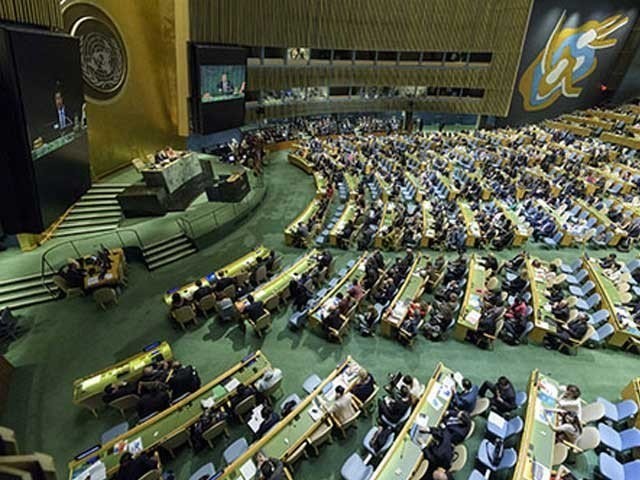 UNITED NATIONS: The United Nations General Assembly adopted by consensus a resolution, sponsored by Pakistan and the Philippines, on promoting interreligious and intercultural dialogue, and to advance a culture of peace and non-violence based on education, tolerance, dialogue and cooperation in the world.

Pakistan’s UN Ambassador Maleeha Lodhi called the resolution a “significant document” to pave the way for genuine and constructive dialogue across the world’s cultural and religious dialogue.

UN General Assembly has adopted by consensus a resolution, sponsored by #Pakistan and the #Philippines, on promoting inter-religious and intercultural dialogue to advance a culture of peace and non-violence in the world. pic.twitter.com/826yczZ6kf

Under the resolution’s terms, the assembly reaffirmed the solemn commitment of all nations to fulfil their obligations to promote universal respect for and protection of all human rights and fundamental freedoms, in accordance with the UN Charter and Universal Declaration of Human Rights. ”

Top 5 at UNGA: Those who grabbed the headlines – and the world attention

At a time when multilateralism is under stress and many parts of the world are witnessing the rise of Islamophobia and spread of xenophobia, this resolution helps to reaffirm the need for dialogue and places the emphasis on the bonds that unite us,” Ambassador Lodhi said.

Initially introduced as a response to the fatal theory of the ‘Clash of Civilizations’ that followed the 9/11 attacks, the resolution condemned any advocacy of religious hatred that constitutes incitement to violence or discrimination ; and underlines the importance of interfaith and intercultural dialogue as a valuable tool for promoting social cohesion, and peace and development in the world.

“In a fraught and uncertain world,” the Pakistani envoy said, “this resolution has special significance as it promotes interfaith and intercultural dialogue and encourages those working for peace and better understanding among people.”

Under the resolution, the assembly encouraged member states to consider, as and where appropriate, initiatives that identify areas for practical action in all sectors and levels of society for the promotion of interfaith and intercultural dialogue, tolerance, understanding and cooperation.

Kashmir and India: Pakistan staples at the UNGA

States were invited to promote reconciliation to help ensure durable peace and sustained development, including through reconciliatory measures and acts of service.

UNGA also welcomed declarations adopted by the Global Forums of the UN Alliance of Civilizations, and invited relevant stakeholders to continue their efforts to promote mutual understanding among different civilizations, cultures, religions and beliefs.

It also stressed over the importance of moderation as a value within societies for countering violent extremism as and when conducive to terrorism, while respecting human rights and fundamental freedoms.