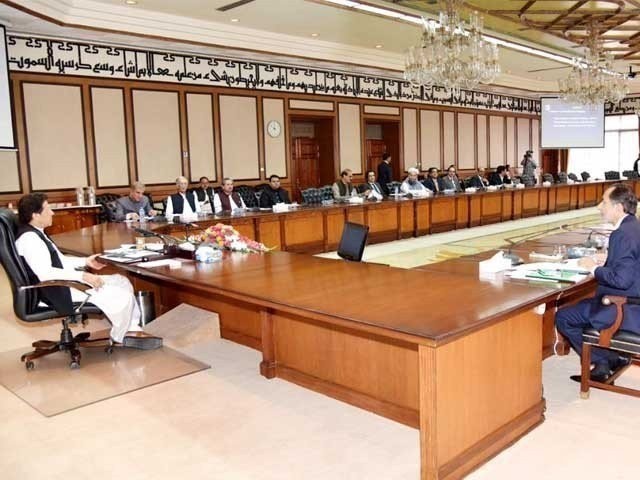 ISLAMABAD: A special meeting of the federal cabinet on Monday reviewed performance of each ministry with a view to enhancing their performance and improving quality of life of the people, a statement issued by the media wing of the Prime Minister’s Office said.

The six-hour marathon session, chaired by Prime Minister Imran Khan, decided to task each ministry with a specific plan for implementation over a period of five years.

It directed that all the departments concerned will work in tandem to ensure optimum output.

In the meeting, the prime minister gave 10 minutes time to each of the ministers for briefing. Afterwards, a five minutes question-and-answer session was held with each minister. The discussion focused on service delivery, austerity measures and future plans.

“Discussions on actions already taken in terms of service delivery, austerity measures adopted and future plans, were held in each case with a view how to improve performance under each of these heads further,” the statement said.

“It was decided that each ministry would be further tasked with a specific strategic plan for implementation, spread over five years so that all concerned work in tandem for optimum output,” it added.

“It was also decided that such review meetings would be held every three months to judge performance of the ministries, adopt midway course corrections, where required, and to ensure overall performance of the government that was on track — main aim of which was improving the quality of life of Pakistani citizens.”

Sources said that the some of the ministers received high praise from their cabinet colleague, while some others were asked to improved their performance. Railways Minister Sheikh Rashid himself briefed the cabinet about his performance. The meeting appreciated him by thumping of desk.

Similarly, the sources said, the prime minister appreciated the performance of the Information Minister Fawad Chaudhry. He directed the minister to present the government’s point of view in a more pertinent manner.

Earlier this month, PM Imran hinted at reshuffle in the federal cabinet, while interacting with a select group of senior journalists in Islamabad. The prime minister said he would receive progress reports from the federal cabinet, especially on the cost-cutting measures they had taken.

The sources said that the meeting lauded State Minister Murad Saeed for his work, adding that he could be elevated to a full-fledged minister. They also said that Minister for Privatisation may be given additional charge of civil aviation.

Talking to the media after the meeting, Foreign Minister Qureshi said that the prime minister had the prior knowledge of the performance of his ministers. “The prime minister has already received reports from all the ministries,” he said.

During the cabinet meeting, secretaries of different ministries briefed the prime minister about their performance. “The performances of the ministers as well as the allies remain satisfactory.