An amount of Rs1.8 millio­n was volunt­arily donate­d by employ­ees from all the hotels and busine­sses of Hashoo Group
By Press Release
Published: December 8, 2018
Tweet Email 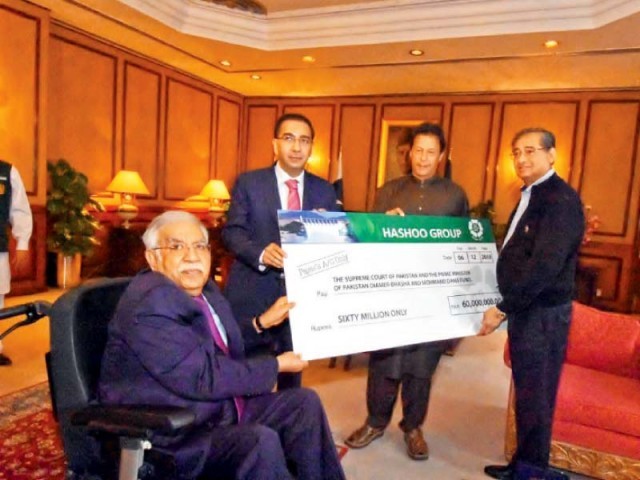 An amount of Rs1.8 million was voluntarily donated by employees from all the hotels and businesses of Hashoo Group. PHOTO: FILE

ISLAMABAD: Hashoo Group Chairman Saddrudin Hashwani and Deputy Chairman and CEO Murtaza Hashwani called upon Prime Minister Imran Khan at his secretariat on Thursday to present a cheque of Rs60 million toward the Prime Minister and Chief Justice Diamer Bhasha and Mohmand dam fund. Hashoo Group owns and operates the landmark Pearl Continental and Marriott Hotels in Pakistan and this donation puts it among the top 10 private sector companies contributing toward the national cause. Raising funds for the cause started earlier this year when employees from Hashoo Group voluntarily opted to donate one day’s salary into the Supreme Court fund. An amount of Rs1.8 million was voluntarily donated by employees from all the hotels and businesses of Hashoo Group, after which the organisation added Rs58.2 million bringing up the amount to Rs60 million. In August, the chairman had called upon Imran Khan, subsequent to his selection as the prime minister, to congratulate him and had assured him of full support in initiatives toward the betterment of Pakistan.