Asks AGP to file a review petiti­on before the SC on its anti-encroa­chment drive order in Karach­i
By Our Correspondent
Published: December 5, 2018
Tweet Email 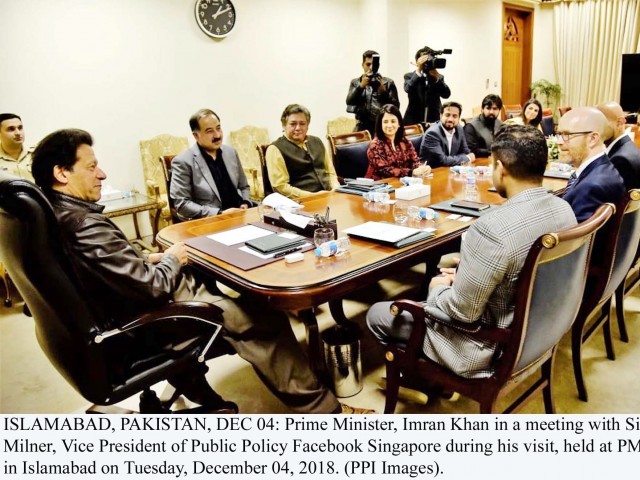 ISLAMABAD: Prime Minister Imran Khan has stressed on the need for an effective mechanism to check the misuse of social media in spreading fake, violent and hate content.

He said this in a meeting with Facebook Singapore Public Policy Vice President Simon Milner who called on him at the Prime Minister Office.

The PM said Facebook could play an important role in checking the negative attempts that threaten society and social value with its large number of subscribers.

He said there was a huge potential for the organisation for developing online communities in Pakistan in the fields of health services, health awareness, campaigns in far-flung areas as well as social services.

Meanwhile, PM Imran Khan approved in principle the constitution of a task force on technology driven knowledge economy that was being established with an aim to build a powerful knowledge economy.

The decision was taken during a meeting of the Prime Minister with Dr Attaur Rehman at the PM Office. The Prime Minister said building intellectual capital of the country industrialisation and development of human capital, enhancement of value added products along with quality management for optimisation of productivity were among the foremost priorities of the government which would help realize the potential of the country.

He said that there was a huge potential in the youth of the country to excel and secure Pakistan’s share in medium and high-end technologies.

Pak-UAE ties based on mutual cooperation and support: PM Imran

Meanwhile, PM Imran Khan directed the Attorney General for Pakistan to file a review petition before the Supreme Court over its earlier orders on the anti-encroachment drive in Karachi. PM Imran issued the directive during a meeting with Sindh Governor Imran Ismail, who called on him, PM Office media wing said in a press release.

During the meeting, the issue of on-going anti-encroachment drive in Karachi was discussed. APP