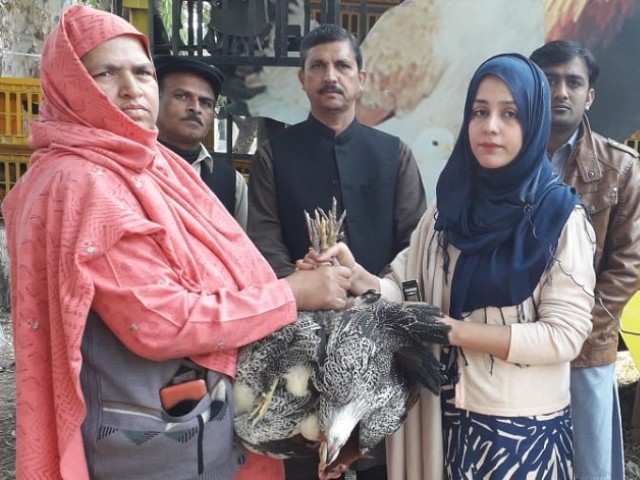 RAWALPINDI: Following Prime Minister Imran Khan’s vision of reviving the country’s crippling economy through his chicken and egg business model, the government on Tuesday kicked off a drive to promote poultry industry among local residents.

According to Rawalpindi livestock department additional director Dr Muhammad Arshad, 2.5 million units will be distributed among residents of Rawalpindi division with each unit comprising four chickens and a cockerel. The price of one unit is set at Rs1,200 in first phase of the campaign.

Dr Arshad told The Express Tribune that chickens in each unit are 85 days old and fully capable of laying eggs frequently.

First 100 units of the drive were distributed among residents of Shamsabad area of the city, where a large number of citizens took keen interest in the government’s initiative.

According to livestock officials, all chickens and cockerels had gone through a vaccination process to fight seasonal diseases and each chicken is capable of laying around 150 eggs per year. They said these chickens have tender and delicious meat and can be farmed without any special meal as they can be fed kitchen waste at home.

Distribution of chicken business units will promote poultry industry besides providing high quality food to the masses, said the officials, adding that a further 100 units will be distributed on November 15.

People can procure units by filling a verification form from the Poultry Research Institute with a copy of their identity cards.

Last week, Prime Minister Imran hit back at criticism over his proposal to alleviate poverty by developing the local poultry industry, citing a similar recommendation by US billionaire Bill Gates.

“For the colonised minds when desis talk about chickens combating poverty they get mocked, but when ‘walaitis’ talk about desi chicken and poverty it’s brilliance!,” PM Imran said in a Twitter post.

For the colonised minds when desis talk about chickens combating poverty they get mocked, but when "walaitis" talk about desi chicken and poverty it's brilliance! https://t.co/bjvQQIVoRv

In a speech on Thursday marking his government’s first 100 days in office, the PTI chief had said rural women will be given chickens and eggs to start poultry businesses to help eradicate poverty.