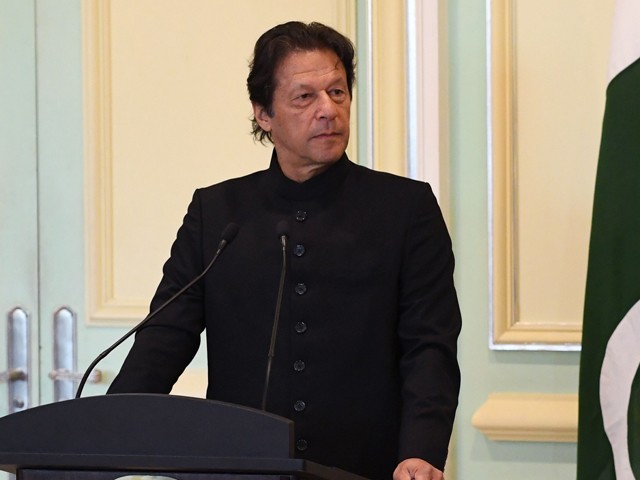 Prime Minister Imran Khan has said the opposition was in a hurry to see an end to his government in order to protect their corruption.

“Those making a noise know that they will soon end up in jails,” said the prime minister while addressing the Pakistani diaspora in Kuala Lumpur on Wednesday, Express News reported.

“They [opposition] are so desperate that they declared my government a failure on the very first day — even before my victory speech,” said the prime minister.

Political opponents should have given his government at least 90 days before starting assessing its performance, he added.

Both liberal and religious parties have joined hands to ‘save democracy’, said Imran, adding the opposition parties were only gathering together to protect their corruption.

“There will be no NRO and charter of democracy … this government will put all thieves in jail,” he remarked.

The prime minister said the cases, currently being investigated by the National Accountability Bureau (NAB) against opposition leaders, were not even lodged during his tenure, but registered in the previous government’s term.

“We haven’t lodged any cases yet, but they are already scared.”

Commenting on the economy, the prime minister said the government will make all-out efforts to improve governance to attract foreign investment. “The time is not far when we will be giving loans to other countries.”

The prime minister urged overseas Pakistanis to send remittances through legal channels to the country, adding that Minister for Finance Asad Umar was striving to make transactions more easy.

“Overseas Pakistanis currently send $20 billion which can be easily increased by $10 billion to $15 billion,” he stated.

He said money laundering laws were being amended to further reduce $10 billion sent abroad illegally every year, adding investigations were underway to ascertain routes and ways used in the illegal practice.

Meanwhile, the prime minister on Thursday said his visit to Malaysia would strengthen ties between the two countries.

“I want to express my heartfelt thanks to Prime Minister Mahathir Mohamad for his warm hospitality and I want to thank his ministers and the Malaysian business community for welcoming us in the spirit of friendship. This trip will strengthen ties between our two countries,” he tweeted.

Earlier, the prime minister, while addressing a joint press conference after a one-on-one meeting with his counterpart Mahathir Mohammad, said Pakistan intended to learn from Malaysia’s economic development and progress through the years.

Prime Minister Imran Khan on Thursday directed the authorities concerned to take special measures to protect the rights of women, children and maids, saying that the provision of justice is not linked to the availability of resources but to compassion of the state.

“Provision of easy and speedy justice is a key component of the Pakistan Tehreek-e-Insaf’s (PTI) manifesto. Our government would try its utmost to ensure justice to the needy people,” said the prime minister while chairing a briefing on legal reforms at the PM Office,

Parliamentary Secretary Malaika Ali Bukhari apprised the prime minister on the measures being taken for the protection of women rights.

The prime minister said protection of citizens’ rights and providing them easy and speedy justice are the fundamental responsibilities of the government.

The meeting was told that the objective behind reforms was to introduce new laws, besides amending the existing ones to provide easy, low-cost and speedy justice in accordance with the PTI’s manifesto.

Federal Minister for Law and Justice Farogh Naseem said the government was introducing technological solutions to dispense speedy justice. “The government will also introduce laws to provide legal support to the needy people,” he said.

The meeting was told that legislation would also be made to protect women’s rights — including those related to inheritance. The minister said a whistleblower protection and vigilance commission would be formed to protect as well as the reward those who expose corruption or other offences.

The meeting was told that the mutual legal assistance (MLA) bill would be introduced to finalise agreements with different countries for bilateral legal assistance. The bill has been pending for the last nine months, Naseem added.

[WITH ADDITUONAL INPUT FROM APP]

Sargodha girl ‘thrashes, robs’ man after befriending him on Facebook