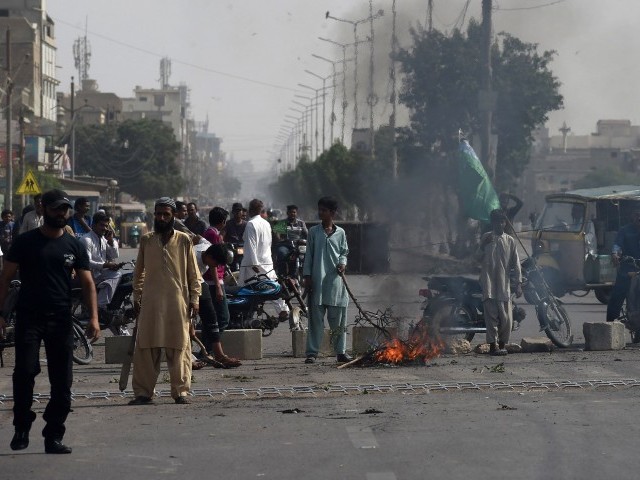 TLP supporters on a blocked street during protests. PHOTO:AFP

ISLAMABAD: The Supreme Court judge Qazi Faez Isa has asked whether the country is to be run under the law or through street power and whether shutting down the entire country during strikes is not a matter of security.

Justice Isa raised these questions on Friday while hearing – together with Justice Mushir Alam – a suo motu case regarding the last year’s sit-in organised by the Tehreek-e-Labbaik Pakistan (TLP) at Islamabad’s Faizabad Interchange against the controversial changes in lawmakers’ oath.

The two-judge bench also gave clear indication to set future parameters for protests and the role of different departments. “We want to set parameters for future,” said Justice Isa.

Earlier, the judge expressed concern over the reports submitted by the Inter-Services Intelligence (ISI), the Pakistan Electronic Media Regulatory Authority (Pemra) and the Election Commission of Pakistan (ECP) with regard to sit-in that continued for over two weeks.  The bench asked the organisations to file fresh reports by removing discrepancies highlighted by the bench during Friday’s hearing.

Interestingly, during more than two-hour hearing, the bench did not ask any query about the recent protests and strikes also spearheaded by the TLP after the SC’s October 31 order to acquit a blasphemy accused Aasia Bibi. The protests that suspended life throughout the country for three days and got violent at many places ended after government signed a deal with the TLP leadership.

“Peaceful protest is right of every citizen but violence will not be allowed,” noted Justice Isa. “On the one hand, we are begging for aid over the world but on the other hand billions of rupees of properties are being burnt during protests.”

Earlier, the bench expressed anger over the non-appearance of the Attorney General for Pakistan Anwar Mansoor Khan and the ECP secretary Babar Yaqoob.   Deputy Attorney General Sohail Mahmood told the bench that the AGP had left to attend some cases at the SC Lahore registry.

The bench remarked that they had given the date of hearing on desire of the AGP. “What would be more important than a case about shutting down of the entire country,” Justice Isa said. “If the government does not want to pursue this case then it should tell us to bury it.”

The bench also took exception to the ISI’s ‘inability’ to provide tax details of the TLP leaders. The agency said it did not have the mandate to collect the details as the Federal Board of Revenue (FBR) is relevant department.

Justice Isa asked Ministry of Defence Director Legal Falak Naaz if the ISI is governed by law or not.  “What’s its mandate? Their (ISI) job is to save Pakistan or they are doing any other job?” he said.

The official said the ISI is governed by the country’s law, adding that the agency played its role to end the last year’s sit-in. The bench, however, asked him to tell a specific law.

“The FIA [Federal Investigation Agency] works under the FIA Act 1974. Should we call secretary defence or DG ISI to explain which law the agency works under? If the ISI cannot tell us the details then we will ask the financial details from police or Intelligence Bureau (IB).”

The bench also asked what kind of security is being provided to the citizens of Pakistan. “Whenever the issue of security arises, schools are closed. Is there any other country in the world where schools walls are 12 feet high? It is sad that the country remained shut for 22 days last year,” he added.

Justice Isa also asked if the Pakistan Tehreek-e-Insaf (PTI) apologised to people for disrupting the country’s affairs by holding a 126-day long marathon sit-in in 2014 at the Constitution Avenue. Even judges could not enter the SC premises during height of those protest, he added.

“Later their [PTI’s] allegations of rigging in 2013 general elections could not be proved during probe by a high powered inquiry commission led by former chief justice Nasirul Mulk.  Did they apologise after the inquiry commission report,” he asked.

He also referred to May 12, 2007 incident said the lawyers’ movement was peaceful but 50 people were killed on roads of Karachi on that day and nobody knows about their killers. “We cannot talk about May 12 because a general [Pervez Musharraf] was ruling the country then,” Justice Isa added.