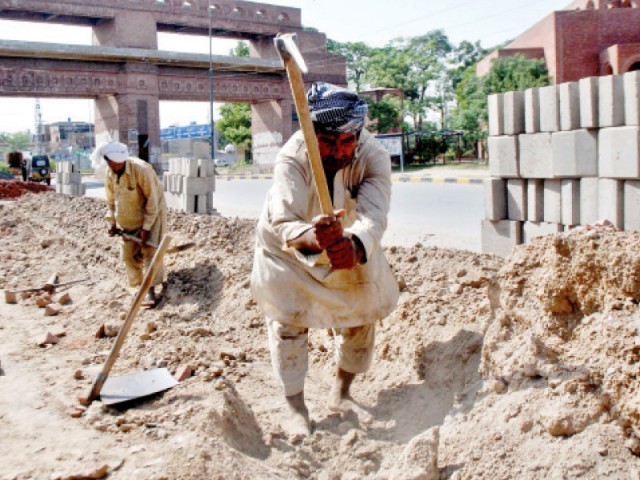 Ongoing development work in the public and private sectors has come to a screeching halt due to the rise in prices of building material. Locals have been terribly affected as a result of the soaring rates of cement, iron and other construction material, Express News has learnt.

Also affected are daily wage workers, including masons, who return home in the hundreds thanks to the lack of work opportunities.

The unstoppable surge in petroleum prices has affected citizens at all levels and the case for building material is no exception. The price for a bag of cement has risen from Rs515 to Rs600, while the price of iron rod has jumped from Rs74 to Rs104 per kilogramme. On the other hand, the cost of gravel, which previously used to cost Rs50,000 per truck, has risen to Rs80,000. Meanwhile, the price of bricks also increased to Rs7,000 from the previous Rs6,000 per 1,000 units. Likewise, the price of a trolley of sand has gone up to Rs6,000 from Rs2,600.

The persistent rise in the prices of building materials is affecting the completion of developmental projects as well as construction in the private sector. As a result, builders are increasing their rates and cutting down operations. The suspension and delays in development work is creating a surge in unemployment. The labor associated with the construction sector, including masons and other workers, are also severely hit.

Hundreds of daily wage workers, who frequently visit the commercial centres of Rahim Yar Khan in search of work during early morning hours, are now seen returning home empty-handed. Consequently, the construction industry of the city is in a state of panic, chaos and confusion. Transportation fares have drastically shot up after the surge in petroleum prices, making cement, iron and all other building materials much costlier. The rise in construction costs have added to the miseries of middle-class citizens, who are striving hard to make ends meet. For them, the dream od owning a home seems further than ever.

While speaking to Express News, locals say they are no longer able to build homes even after investing their entire savings.  Many blame the nepotism of the politicians for the unreasonable hikes in prices of building materials.

They say that most of the cement and iron factories belong to politicians and their families sitting in the national and provincial assemblies. They complain that the government is not taking any measures to monitor and control prices. They bemoan that concerned institutions are not taking any actions against influential families. As a result, various civil groups and communities are demanding that the government identify the owners of the cement factories.

Irate citizens maintained that cement is not coming from any new formula. It is being prepared from minerals that the country already has. It should be figured out how prices of cement were increased by 30% in a single year, they demanded.

Man attacked with acid for ‘texting’ a girl in Burewala