Re1 to be charged for each litre of water extracted, provinces tell SC

Re1 to be charged for each litre of water extracted, provinces tell SC 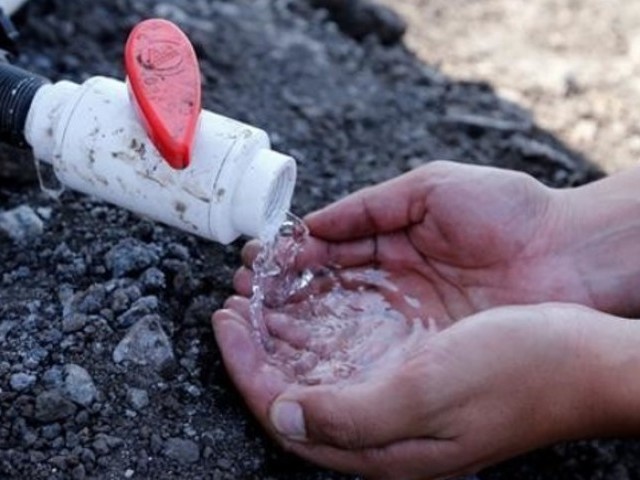 ISLAMABAD: Provinces on Tuesday informed the apex court that they had decided to charge Re1 on every litre of water extracted by the water bottling companies operating in their territories.

The Re1 rate is confined to bottling of water and not applied to the beverages industry at this stage.

“Let the decision of provincial governments be placed before the court on Monday in Lahore,” said a three-judge bench headed by Chief Justice of Pakistan (CJP) Mian Saqib Nisar on Tuesday.

“After hearing all parties it will be decided what rate should be charged on water previously extracted by the companies,” the bench added.

“Therefore, it is recommended that a waste treatment plant or salt recovery plant for RO [reverse osmosis] reject is installed to control the utter violation of the Sindh Environmental Protection Act of 2014 until such time operations must be stopped to save the environment. Moreover, it is recommended that Rs5 is charged on every litre of water extracted by the company,” it said.

On Oct 27, the CJP had visited the Nestle’s Karachi plant along with Dr Siddiqui, Supreme Court Assistant Registrar Munnawar Ali and advocate Zafar Iqbal Kulanauri, and directed them to submit a comprehensive report.

The court also directed Dr Siddiqui to inspect eight bottling companies in Punjab after inspecting their brands from the market and submit a comprehensive report within 10 days.

The court has also sought a progress report from the federal government about implementation on the recommendations of an international symposium on ‘Creating a Water-Secure Pakistan’ organised at the SC premises last month.

The symposium had resolved that Pakistan’s strategy regarding implementation of the Indus Waters Treaty (IWT) with India should be revisited to bolster its case.

“The International Water Law should be taken advantage of by consistently putting forward Pakistan’s perspective before various international forums, and Pakistan’s strategy regarding implementation of the IWT should be reconsidered and revisited to bolster its case,” said the declaration.

In the declaration, it has been resolved that the government must introduce water accounting based on modernised water data collection methods to assess, amongst other things, the water availability per capita, in order to build trust amongst the provinces regarding water apportionment, particularly considering the requirements of the Indus Delta and lower riparian areas in Pakistan.

It is also recommended that Pakistan should immediately set up a powerful task force on water. Likewise, agricultural income tax should be levied and recovered across the board throughout Pakistan through appropriate authorities under an effective legal framework.

The potential of Pakistan’s part of the Indus Basin has to be realised through priority actions that need to be taken on an immediate basis, says the declaration, maintaining that the integrity of the Indus Basin is a serious and important responsibility of the federation as well as the provinces.