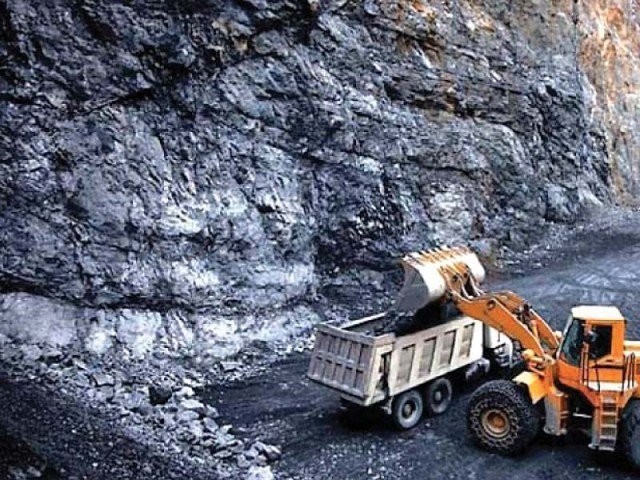 KARACHI: The Sindh High Court (SHC) issued a stay order on a plea against handing over of 3,200 acres of land to the Lakhra Coal Mining company. The bench directed the Sindh government not to let the company occupy the land.

A two-member bench heard the plea against handing over 3,200 acre of land to Lakhra Coal Mining company for mining.

The plaintiff’s lawyer, Barrister Zameer Ghumro, observed that according to the Election Act, 2017’s Section 230, the caretaker government didn’t have the authority to hand over the land.

Ghumro said the caretaker government’s mandate is limited to performing routine tasks only. The Sindh Cabinet has yet to approve this decision, he said, adding that the coal mining company should be barred from occupying public land.

Issuing a stay order on the plea, the court issued notices to the Sindh government. It ordered the government to not give ownership and adjourned the hearing till November 22.

The SHC issued notice to the chief secretary in a case, praying for court directives to private and government petroleum and gas firms to provide development funds to the districts from where they get oil and gas.

A two-member bench, headed by SHC Chief Justice Ahmed Ali Shaikh, heard the petition. Advocate-General Salman Talibuddin and the company’s lawyer, Shahab Sarki appeared in the chamber. Sarki said that he has submitted a Wakalatnama in the court on behalf of the Pakistan Petroleum Limited.

The bench remarked that implementation of the orders of the Supreme Court is necessary. It also sought  a report from all related deputy commissioners and companies on the next hearing.

The court asked the officials of oil and gas firms to tell how many jobs were given to locals at their sites.

The petitioner had stated that oil and gas companies were working in more than 18 districts of the province. He said a large amount of funds given for social welfare by the companies was misused in corruption. The court adjourned the hearing till November 21.

Lack of doctors in Sindh

The SHC issued notices to the Sindh Public Service Commission on shortage of doctors and paramedical staff in government hospitals calling its additional secretary to present details by November 21.

A two-member bench of the SHC heard the petition on shortage of doctors and paramedical staff at public hospitals on Thursday.

The petitioner’s counsel maintained that the province still has 1,700 vacant positions for doctors. The public hospitals of Sindh have vacancies for hundreds of doctors and paramedical staff, he said, lamenting that hospitals even lacked staff for key positions such as gynecologists, pathologists, surgeons and child specialists.

According to a report submitted by the health secretary, the district hospital of Shikarpur has unfilled positions for 79 doctors and surgeons.

The SHC sought a copy of trial court orders after bail applications were filed by four high-profile target killing suspects, belonging to the Muttahida Quami Movement, including Kamran Madhuri.

A two-member bench heard the case. The court directed the defense counsels to present a copy of the trial court order and continue their arguments in the next hearing.

The prosecutor maintained that Madhuri is an extremely dangerous suspect and is booked in 11 different cases while one case each has been registered against suspects Mohsin and Sohail Nadeem.

A special bench of an anti-terrorism court had also turned down the bail applications of the suspects, he said, requesting the court not to grant bail.

According to the prosecution, the suspects were involved in a police van attack in Chakra Goth in 2011. The incident, the prosecution claimed, resulted in the killing of six police officers and injured several citizens.

An identification parade of the suspects was completed before a judicial magistrate, the prosecution maintained, adding that the suspects were booked in several other cases of murder and terrorism.

The court ordered the defence to present copies of the trial court order and set the next hearing on November 13.

The SHC expressed dissatisfaction over the Dr Ruth Pfau Civil Hospital, Karachi management and slow progress by the Joint Investigation Team (JIT) on their report relating to a petition about the disappearance of a child from the hospital. The bench summoned the health secretary over poor condition of biomedical facilities on November 22.

The SHC was hearing a petition filed by the parents of the missing child, Nouman, who had earlier disappeared from the hospital.

A report in this regard was submitted before the court which said that some guardians and one woman were taken into custody on testimony of the child’s mother. Later, they were released due to lack of evidence. The report stated that an inquiry would be conducted if the parents asked for it.

The CCTV cameras of the hospital were not functional on the day Nouman went missing, it was learnt during the investigation.

The health secretary, however, apologised to the court and said that all CCTV cameras have been activated now in the hospital.

On this, the court remarked if the Civil hospital is in this situation, what can be said of the other hospitals.

The court asked if the CCTV cameras installed by the Karachi Metropolitan Corporation and police at in and out gates of the hospital were examined. It ordered activation of the CCTV cameras of the Civil, Jinnah and other public hospitals.

The court also issued orders to increase police deployment in the premises of hospitals. All available technology should be used for the recovery of the missing child, the court directed.

Nouman’s mother stated before the court that she went to the hospital on May 28 with her two children for a medical check-up. She said as she went for to get a token for the outpatient department, her son went missing. She appealed the SHC to help her in the recovery of her son.

The court adjourned the hearing till November 22.