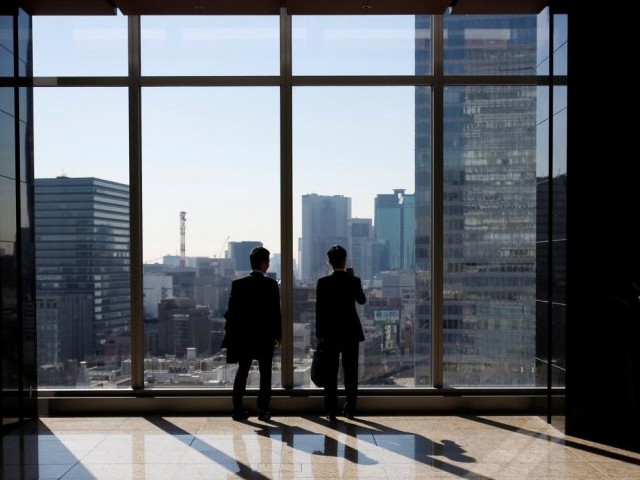 Businessmen are seen inside a high-rise office building. PHOTO: REUTERS

KARACHI: A huge chunk of Pakistan’s 22 richest family-owned businesses, tracing back to the 1960s and 70s like Hyesons, Bawany and Valika was lost in history and their mark is nowhere to be seen today.

Had they incorporated corporate governance culture and set business rules among their members, there were high chances they would have continued to flourish until now.

“Hyesons, Bawany and Valika…remained no more strong (businesses) due to disintegration,” BBCL-BDD Chairman Pervez Iqbal said at a roundtable conference held at the IBA city campus earlier this week.

“Family-owned businesses need to have mediation, succession and progression plans in place in order to flourish,” Iqbal said at the Family Business Conference held on Thursday.

“Had 1971 (fall of Dhaka) never happened, many business families would still have broken apart, perhaps a few years later than they actually did. The reasons lie within those family firms,” wrote Abdul Razak Dawood, current Prime Minister’s Adviser on Commerce, Textile, Industry and investment, in an article in 2008.

Imrooz Group of Companies Chief Executive Officer Ameed Riaz told conference participants that most of the family-owned businesses had vanished due to the non-existence of businesses rules.

He emphasised the need for a mandatory constitution for such businesses. “This practice has helped families avoid disputes and has also aided in resolving them when they emerge.”

The constitution should carry clauses defining procedures and conditions for hiring son- and daughter-in-laws, retirement plans of family members and a proper procedure to welcome next generation into the businesses.

“Leadership in family businesses should be given on merit rather than seniority within the family members…CEO may be hired from outside if the family lacks a capable leadership,” he said, adding that this should be part of the constitution.

“Family businesses should have a written constitution by the time the third generation enters the company, because this is the stage where majority of the businesses dissolve owing to confusion and disputes among siblings,” he suggested.

“The fact that only 15% of all family-owned businesses survive until the third generation indicates that governance is a crucial issue for such companies,” Dawood pointed out in his article.

Imrooz Group of Companies at crossroads

Riaz said his father had established Imrooz Group of Companies in 1949. Third generation, however, is not keen to be a part of the business. “We (three brothers) have eight kids and none of them is interested in inheriting the business,” he said.

He stated that they are discussing the ways of dealing with the situation. “Obviously, we will not switch off the lights and shut the business down,” he stressed. “We are planning these days about how to face the situation.”

He said “my company’s constitution allows hiring CEO from outside the family in case no capable family members fits the post.”

Speaking on the occasion, IBA Academic Director of the Family Managed Business Program Aysha Anas Iftikhar said most of the students want to join multi-national companies (MNCs) because family-owned businesses lag far behind from MNCs standards.

She further stressed upon the need to transform family-owned businesses into professional entities because they play an effective role in nurturing economies around the world. They account for harshly two-third of all business entities globally. They offer 50-80% job opportunities and 70% of them are listed at stock markets. Their participation stands at 70-90% in the GDP. They contribute heavily in tax payment, investment and philanthropy.

“Family businesses should get listed, create wealth for the economy… and go global to cater soft image of Pakistan,” she said. “They are well poised to do (all) this.”

Pakistan Centre of Philanthropy’s Zaffar A Khan said HR and planning departments are the two strongest pillars in any of the well-doing organisations. They should build sense of ownership of the business among employees and empower them to take decisions. At the same time, employees should remain accountable for their decisions.