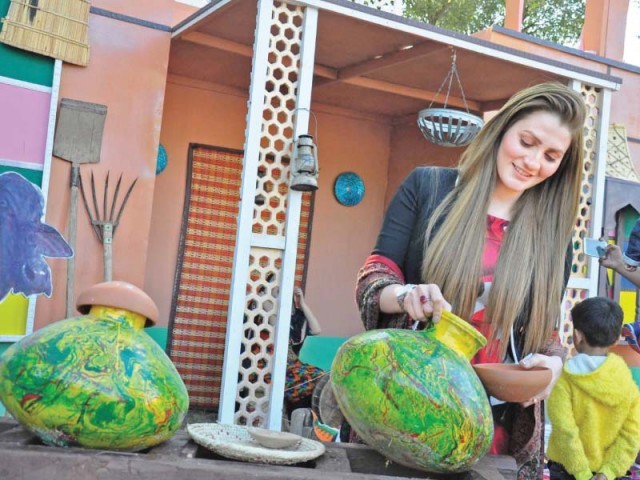 A foreigner takes interst in potery on display at Lok Mela. PHOTO: EXPRESS

The pavilion showed the beautiful culture of Balochistan through embroidery, dresses, music and food, which is typically a rare find in Islamabad. The pavilion has been set up by the Balochistan directorate of culture in collaboration with Lok Virsa.

Visitors took a keen interest in the Balochistan pavilion as it stood out among the pavilions of other provinces. The organisers have allocated spacious pavilions to all the provinces, Gilgit-Baltistan and Azad Jammu Kashmir for showcasing their indigenous folk culture in a creative and interactive manner

Balochistan Culture, Tourism and Archives Secretary Zafar Ali Balehdi was the chief guest on the occasion.

Speaking on the occasion, Zafar Ali said, “Lok Virsa deserves commendation for promoting the rich heritage of country in such a beautiful way. Lok Virsa’s effort in projecting the true culture of Balochistan is praiseworthy. “We will support every initiative that can lead to create national harmony and integration among the nation, which is need of the hour.”

A visitor, Sana Nabeel, said “one can see the glimpses from every corner of Pakistan created in the lush green surroundings of the Shakarparian Hills, contributing significantly to enhance the stature, beauty and landscape of the federal capital.”

Punjab Musical Night is scheduled tomorrow at 7pm whereas ‘Lok Mela’ is going on with all its festivities from 10am to 10pm till November 13, 2018.