A delega­tion will leave for Beijin­g this week to hold negoti­ations­
By Shahbaz Rana
Published: November 7, 2018
Tweet Email 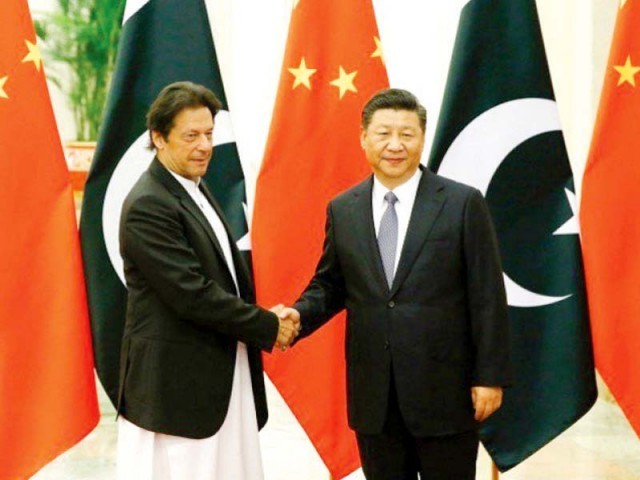 The government is trying hard to get maximum short-term support from friendly countries aimed at avoiding a big and front-loaded bailout package from the IMF. PHOTO: FILE

ISLAMABAD: China, for the first time, has set up a task force to assess Pakistan’s financial needs for keeping its all-weather friend afloat, deviating from its earlier practice of quietly bailing out the country in times of stress.

Pakistan announced the constitution of the task force on the balance of payments (BoP) support and giving market access for Pakistani goods at the end of Prime Minister Imran Khan’s five-day visit to China. The announcement also killed false rumours that China had placed $4.5 billion with the State Bank of Pakistan (SBP) as a result of the premier’s visit. During the visit, the two sides held discussions on immediate market access for Pakistan’s export goods as well as BoP support, according to a statement issued by the Ministry of Finance on Tuesday.

It said, “The top Chinese leadership expressed their strong support and a task force was established by both sides to discuss the matters further.”

Pakistan has already secured a $6-billion aid package from Saudi Arabia and is also looking for another assistance of $6 billion from the United Arab Emirates (UAE). PM Khan had to go to Saudi Arabia twice in five weeks to secure the bailout package.

The government is trying hard to get maximum short-term support from friendly countries aimed at avoiding a big and front-loaded bailout package from the IMF. A front-loaded IMF package will be tagged with more harsh conditions, said sources in the finance ministry.

In its handout, the finance ministry stated that a senior-level delegation, comprising federal secretaries of finance Arif Ahmad Khan, foreign affairs Tehmina Janjua, planning and development Zafar Hasan and commerce Younus Dagha, along with State Bank of Pakistan Governor Tariq Bajwa, will go on the visit to China.

The delegation will leave on Thursday “to work out the modalities with the Chinese authorities in their respective areas”, stated the finance ministry.  Beijing’s decision to set up the task force to determine Pakistan’s financial requirements for averting a balance of payments crisis is contrary to its past practices. Historically, China has given money after holding talks at the political level.

In July this year, China had placed $2 billion with the SBP to help the country shore up its dwindling foreign exchange reserves. Earlier, China had given $500 million in May for balance of payments support. Chinese commercial banks have also been giving big loans to Pakistan.

During the PM’s visit, Chinese Vice Foreign Minister Kong Xuanyou told the media that the two sides had “made it clear in principle that the Chinese government will provide necessary support and assistance to Pakistan in tiding over the current economic difficulties.

“As for the specific measures to be taken, competent authorities of the two sides will have detailed discussions,” Kong told reporters.

Setting up task forces is the practice of the Pakistan Tehreek-e-Insaf (PTI) government that has so far established more than half a dozen taskforces in areas like energy, civil service reform, institutional reforms, education reforms and recovery of assets stashed abroad.

The finance ministry said that as a result of prime minister’s visit to China the overall economic relationship between the two friendly countries has moved to the next level. During the visit, several avenues of mutually beneficial collaboration were identified and a number of memorandum of understandings (MoUs) were signed between the two sides in the sphere of economic cooperation, it added.

The two sides noted with satisfaction that CPEC’s first stage, which comprised of infrastructure and energy sector improvements, has almost been completed. It was decided that the next stage of CPEC will focus on industrial expansion, agricultural revitalisation and trade integration of the two economies. This phase will help the government of Pakistan in achieving its objectives of job creation and export growth, said the finance ministry.

Discussions at the taskforce level would also provide an opportunity to Pakistan to get market access for products, where it enjoys competitive advantage. The 2008 free trade agreement (FTA) with China has tilted the trade balance heavily in favour of Beijing.