JUI-F chief says PTI govt will have to go home as a reperc­ussion of the decisi­on
By Shahabullah Yousafzai
Published: November 3, 2018
Tweet Email 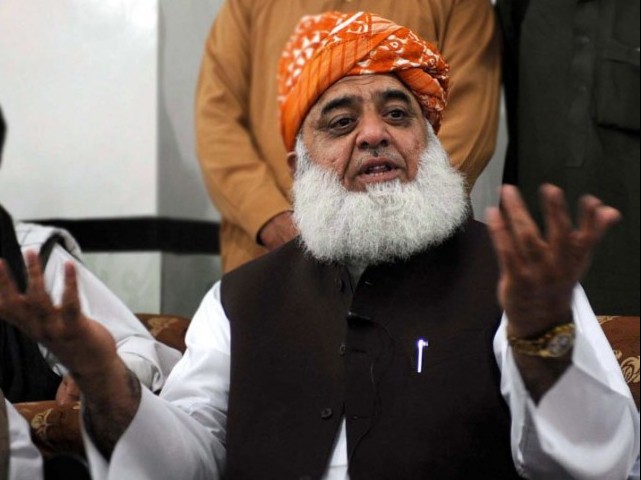 PESHAWAR: Jamiat Ulema-e-Islam-Fazl (JUI-F) chief Maulana Fazlur Rehman has rejected the decision of the Supreme Court in the Aasia Bibi blasphemy case, warning of more violent agitation across the country until the decision is revoked.

Addressing a protest rally in Peshawar on Friday, the JUI-F leader said, “The Pakistan Tehreek-e-Insaf (PTI)-led government will have to go home as a repercussion of the decision.”

Fazl said the courts hanged prime minister of Pakistan Zulfikar Ali Bhutto, disqualified three-time premier Nawaz Sharif, which “we never accepted”, so how could we accept a decision which “is against the spirit of Islam”.

“We are a sovereign country, never accepted dictations from foreign countries, but the PTI-led government has bowed before the EU and US pressure, which we condemn,” said Fazl, predicting that the government would go packing soon.

The JUI-F chief was of the view that the British and EU parliaments cherish the release of Aasia Bibi, a Christian, which shows that the decision came from somewhere else and the language used by an elected premier confirmed all doubts.

“Pakistan stands on an Islamic foundation. We will never accept others’ notation. If we do so, our institutions will crumble,” he added.

Separately in Islamabad, a JUI-F rally led by its leader Abdul Ghaffoor Haideri held protest demonstrations over Aasia’s acquittal in front of the Parliament House and the Supreme Court.

Talking to the media, Haideri said, “The whole nation has dismissed the decision of the Supreme Court.”