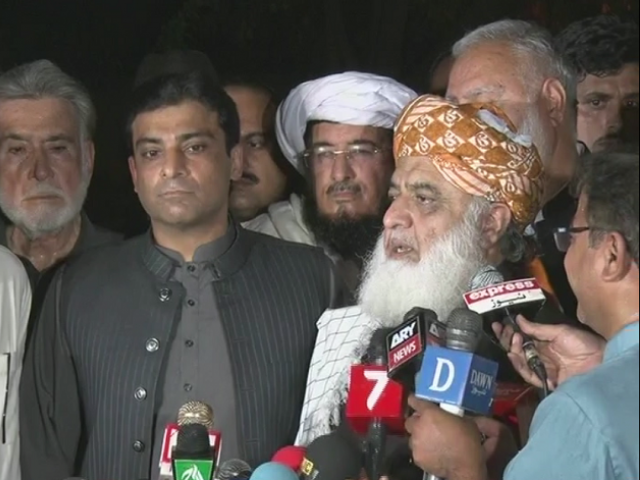 Presidential candidate Maulana Fazlur Rehman on Sunday said all the opposition parties have nominated and shown faith in him for the presidential elections, Express News reported.

“The accusations against me that I have hired TTP to kill Imran Khan are wrong. I am also on their hit list,” he said while addressing the media at Pakistan Muslim League-Nawaz (PML-N) president Shehbaz Sharif’s residence in Lahore.

Rehman, while taking a jibe at the Pakistan Peoples Party, said the PPP also assisted Khan to become prime minister by not voting for Shehbaz Sharif and then again by letting Pakistan Tehreek-e-Insaf (PTI) form it’s government in Punjab.

“We all respect Aitzaz Ahsan and are on good terms with him but PPP can easily withdraw it’s candidate,” he concluded.

Speaking on the occasion, Hamza Shehbaz said the JUI-F chief was the opposition’s joint presidential candidate.

“We will fulfill our role as opposition and will try to convince the parties that are not with us right now, to join us. We will also talk to other small parties as well,” he added.

PML-N leader Saad Rafique also backed Rehman’s nomination. “All of us, our party and opposition parties will vote for him but the PPP must seriously think now and withdraw their candidate,” he said.