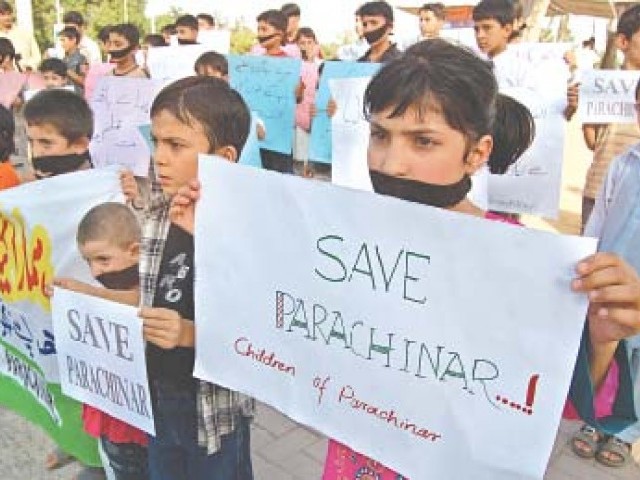 Children from Parachinar peacefully called on the government to help them. PHOTO: MUHAMMAD JAVAID

Over four dozen children orphaned by the militancy in Parachinar on Monday held a protest demonstration in front of the National Press Club in Islamabad to press the government to meet their demands.

Having seen their older kith and kin fail to influence the Government of Pakistan to help them, the little children, some barely knee-high, were holding banners and placards while chanting slogans like “Death to the Taliban”.

“We cannot go home in our summer vacations because the Peshawar-Parachinar Road is closed and militants try to hurt people on the way home,” said little Asghar Ali, who has lived in Rawalpindi for the last year-and-a-half. He said that his father was killed by the militants and his mother sent him here to attend school with his cousin. “I have not been home in more than one year,” he said with tears in his eyes, “I miss my mother. I miss my brothers and sisters.”

Asghar was not alone.

“I cannot go to home like my classmates and I am missing it so much,” said Qaiser Ali, a fifth-grader.

“I don’t know why the militants killed my father. He was a peaceful man. He loved me. He wanted me to go to school. Now I don’t even have the money to pay my school fee,” said Muhammad Irshad. He was upset that the government was not taking any action to help the people of Parachinar.

Muzamil Hussain, another little student, described the Taliban as “very brutal and cruel” while noting that they even killed women and children.

“They hate children!” he maintained.

The children appealed to the president, prime minister and the interior minister to take immediate steps for the safety and the security of people in the besieged area, as they already face a life of uncertainty due to the blocked road and threats posed by the Taliban.