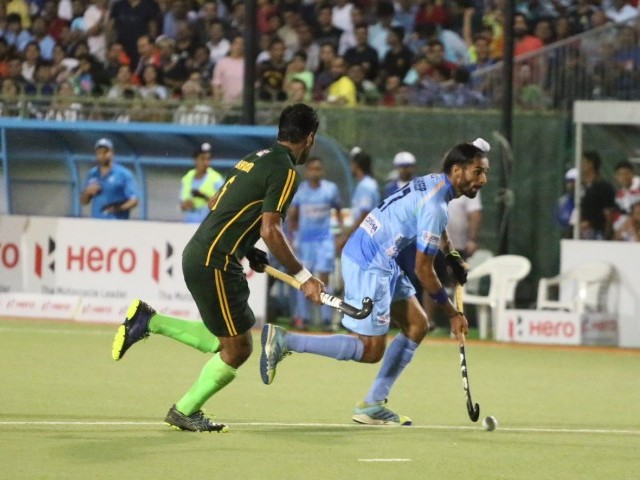 INCONSITENCIES AND DISAGREEMENTS: While Pakistan team is suffering in the Asian Champions Trophy due to incongruent changes in the coaching staff, the members of the staff are not happy with each other too. PHOTO COURTESY: TWITTER/ ASIAN HOCKEY FEDERATION

KARACHI: Pakistan hockey team, with a win against South Korea and a defeat at the hands of India, will be taking on a low-ranked Oman in their third fixture of Asian Hockey Champions Trophy.

Pakistan lost their second match against India despite taking the lead in the very first minute of the match. Muhammad Irfan who was able to score the first goal of the match told The Express Tribune that they were in a commanding position after the first goal.

“We were in good position when we took the lead in the very first minute. It was a bonus for us. At the same time we still had 59 minutes to go,” he said. “We should have controlled the game, we were not able to keep the lead and soon India made a comeback which put us under pressure.”

He added that the team was well synced but they couldn’t end the moves with goals. “We were making some good moves but the finishing was not well enough. We should have played better, we have the ability to do so,” he said.

Meanwhile, talking about their next match against Oman on Monday, the captain of the team Muhammad Rizwan Senior said senior player should take more responsibility. “We lost the last match where the seniors should have taken the responsibility. We are more experienced and have played more matches against India, we should have done well,” he said.

“The next match is against Oman and we have to win it. It will be a test for us before we take on Japan, to whom we lost in the Asian Games. Japan are a rising team and we need match their pace otherwise they might beat us in rankings and in matches,” he said.

He added that team’s problems also stem from the instability in the management. “We have seen coaches and management being changed. This is not good for the team. By the time player get in sync with the coach, he is changed and the new coach brings in new strategies which causes confusion,” he said.

According to a source, members of the team management are not happy with each other, which was visible during the match against India, and coach Muhammad Saqlain has been sent back to Pakistan.

During the match, the manager of the team Hassan Sardar had an argument with Saqlain who was interacting with the team and asking them to control their game.

“The coach Saqlain and manager Sardar and not on the same page, they have a difference in opinion and that is leading to some serious arguments during the matches,” the source told.

Afterwards, source added that Sardar asked PHF to call Saqlain back or he will leave the team.

The source also added that team captain Rizwan Sr is also not happy with the senior players in the team.