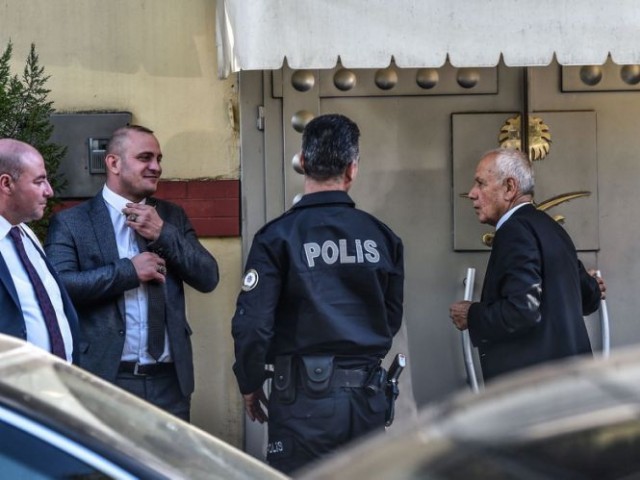 Turkish officials believe journalist Khashoggi was killed although this is not been confirmed by Saudi Arabia. PHOTO AFP

ANKARA: Turkish police on Wednesday, October 17, began a search at the residence of the Saudi consul to Istanbul, in the investigation into the disappearance of Saudi journalist Jamal Khashoggi at the kingdom’s consulate in the city, according to an AFP correspondent.

A team of a dozen police and prosecutors, including forensics experts in white overalls, entered the residence of Mohammed al-Otaibi, a day after he flew out of Istanbul for Riyadh.

Earlier in the day, a Saudi delegation had also arrived at the building to take part in what is presented as a joint search with their Turkish counterparts.

Turkish police had on Monday searched the consulate building itself for over 8 hours, taking away soil and DNA samples for further examination.

Khashoggi, a former regime insider who became critical of Saudi Arabia’s Crown Prince Mohammed bin Salman, wrote articles for titles including the Washington Post. He has not been seen since he stepped inside the Saudi consulate in Istanbul on October 2.

Turkish officials have said they believe he was killed there although this has not been confirmed by Saudi Arabia.

Al-Otaibi left for Riyadh on a scheduled Saudia flight Tuesday afternoon, with Ankara insisting he had not been expelled