The major takeaw­ay of the Saudi visit was the announ­cement by the Saudi King to back Imran’s reform­s agenda­
By Kamran Yousaf
Published: September 24, 2018
Tweet Email 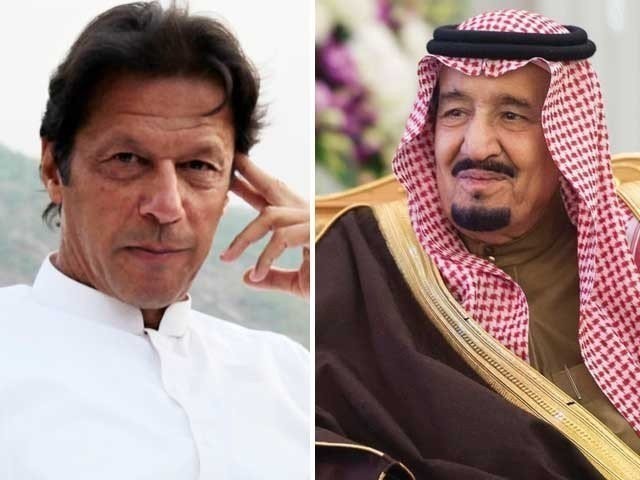 It was a first state visit by a Pakistani leader in years. It was also first foreign trip by Imran Khan as prime minister. What was notable was that Saudi King Salman bin Abdulaziz himself received Imran when he arrived at his palace in Jeddah. Prime Minister Imran visited Saudi Arabia despite his earlier announcement that he would not travel abroad at least for his first three months in office. The reason he had to travel to Saudi Arabia because, in Imran’s own words, he could not turn down an invitation from the Saudi monarch.

Saudi Arabia holds the key for the new government to deal with some of the pressing economic challenges. Pakistan’s economy is currently in shambles and hence requires urgent financial assistance. The PTI government has not yet decided whether to approach the International Monetary Fund (IMF) for a bailout package. It is instead reaching out to countries such as Saudi Arabia for the rescue.

The major takeaway of the Saudi visit was the announcement by the Saudi King to back Imran’s reforms agenda and assure his ‘maximum assistance.’ It was also announced that Saudi Arabia would join the China- Pakistan Economic Corridor (CPEC). Although no details were available, it appears that Saudi Arabia would help the PTI government by investing in the multibillion- dollar CPEC, which is the flagship Programme of China’s Belt and Road Initiative (BRI).

It is a fact, which was also acknowledged by Imran in an interview to the Saudi state media that the Kingdom always stood by Pakistan in difficult times. After the 1998 nuclear explosions when Pakistan was under economic sanctions, it was Saudi Arabia that helped Pakistan’s economy stay afloat by offering oil on deferred payments. But in international politics there are no free lunches. Pakistan also supported Saudi Arabia in times of crises.

The rare hiccup the two countries saw in their ties was in late 2015 when Pakistan refused to join the Saudi Arabia’s campaign against the Iranian-backed Houthi rebels in Yemen. Interestingly, Imran’s party was one of the strong proponents of a resolution that urged the then government of prime minister Nawaz Sharif to stay neutral and not commit troops to Saudi Arabia. That refusal from Pakistan antagonised Saudi Arabia and its other Gulf allies. Pakistan took the difficult decision because its direct participation in the Yemen conflict would have serious implications.

Nevertheless, given Saudi Arabia’s importance, Pakistan of late attempted to placate Riyadh’s concerns. For example, it joined the Saudi-led Islamic military alliance against terrorism and even allowed its former army chief to head the grouping of like-minded countries. But still Pakistan is treading carefully as it continues to remain engaged with Iran assuring the neighbouring country that it would not become part of any campaign that targets any other Islamic country. That is why Iran-Pakistan relationship has also seen upward trajectory. Iran’s Foreign Minister, Javad Zarif, was the first foreign dignitary to visit Pakistan after the change of government.

The challenge for Imran is to maintain that delicate balance, though Saudi Arabia would certainly want the new government to take a clear position. In an apparent shift Imran did condemn the Houthi rebels and hinted at playing a role to resolve the conflict. But mindful of the possible implications, Imran stressed that dialogue was the only way forward, an advice the current Saudi leadership is unlikely to pay heed to, especially on Yemen.

The PTI government needs economic assistance from Saudi Arabia but for that it may have to tinker with the country’s Middle East policy. And that’s where the leadership and diplomatic skills of Prime Minister Imran would severely be tested as any misstep could harm the country’s interests.