Ivory Coast leader in electr­icity produc­tion is target­ing an 11-per cent share of nation­al consum­ption for renewa­bles
By AFP
Published: September 23, 2018
Tweet Email 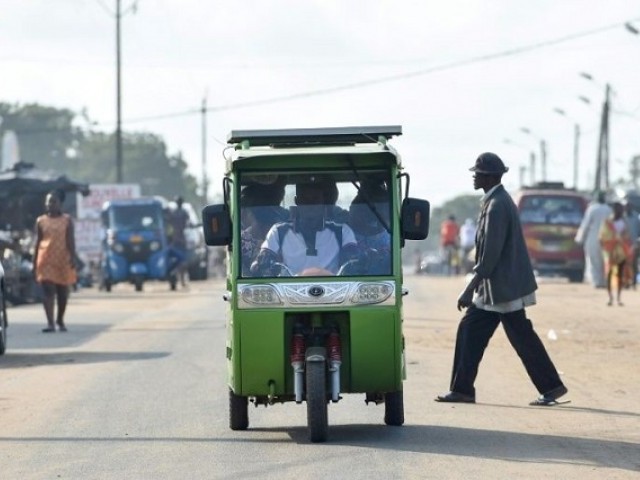 Local politicians are putting great faith in Chinese-made tricycle taxis with rechargable solar energy panels which have been plying routes in Jacqueville, a coastal town outside Abidjan. PHOTO AFP

IVORY COAST: Hi-tech, cheap — and quiet. The Ivorian resort of Jacqueville just outside Abidjan is betting on solar-powered three-wheelers as it looks to replace traditional but noisy and dirty bush taxis.

“It’s cheaper and relaxing!” says local trader Sandrine Tetelo, of the Chinese-made “Saloni” or “Antara” tricycles, which could eventually spell the end for old-school “woro-woro” four-wheelers as Jacqueville looks to make itself Ivory Coast’s premier eco-city.

The mini-cars, 2.7 metres (8.8 feet) long and two metres high, are covered in solar panels each fitted out with six 12-volt batteries, giving the vehicles a range of 140 kilometres (87 miles).

Returning from a visit to China, the solar cars’ promotor Marc Togbe pitched his plan to mayor Joachim Beugre, who was immediately sold.

“We are used to seeing (typically old and beaten up) bush taxis pollute the atmosphere and the environment. We said to ourselves, if we could only replace them by solar trikes,” said Beugre.

“The adventure started in January with two little cars,” added Togbe, who has created a partnership with local businessman Balla Konate.

“I went to China with a friend,” says Konate, “and afterwards I sent four youngsters to Lome for training with a friend who had spoken to me about the project.”

He wants to extend operations to Odienne and Korhogo, towns in the north, the country’s sunniest region.

“Today, a dozen cars are up and running. We are right in the test phase. More and more people are asking for them,” says Beugre, seeing a chance to kill several birds with one solar stone.

Long isolated, his town, nestled between a laguna and the sea, has flourished in terms of real estate and tourism since the 2015 inauguration of a bridge linking Jacqueville to the mainland and cutting transit time to Abidjan to less than an hour.

For the start of the school year in October, Jacqueville plans to bring on stream a 22-seater “solar coach” designed to help deal with “the thorny issue of pupils’ transport”.

Many schoolchildren typically have to travel tens of kilometres from their home village to urban schools.

So far, the trikes have also provided work for around 20 people including drivers and mechanics.

“We’re on the go from six in the morning and finish around 10 or even midnight, weekends too,” says Philippe Aka Koffi, a 24-year-old who has been working as a driver for five months.

A switch to solar and durables may appear paradoxical in Jacqueville, however, as the area produces the lion’s share of the country’s gas and oil.

The wells outside the town produce 235 million cubic feet of gas per day, while several foreign firms run pipelines taking oil and gas across the town to feed the refineries at Abidjan.

But the municipality — total budget 140 million CFA francs (213,577 euros) — sees none of the profits, an issue which has drawn public ire in the past.

The 50-million-CFA trike project is just one piece in a much larger jigsaw which includes the construction of a new eco-city on a 240-hectare (600-acre) site among coconut trees.

“It will not be a city for the rich,” insists Beugre, showing off a blueprint replete with cycle paths and a university.

“All social strata who respect the environment will be able to live there,” he adds.

Yet at national level, such plans are conspicuous by their absence.

Ivory Coast, west African leader in electricity production — 75 per cent of which comes from thermal energy and the remainder from hydroelectric dams — is targeting an 11-per cent share of national consumption for renewables by 2020.

Even though by September the country had burned through barely one single megawatt of solar energy for this year, Beugre is undaunted.

“Our ecological project will go all the way” and “stand up to the power of oil and gas,” says the cowboy-hatted local politician.

“In years to come, we want to ensure that these solar-power machines become the main means of travel in the area.”