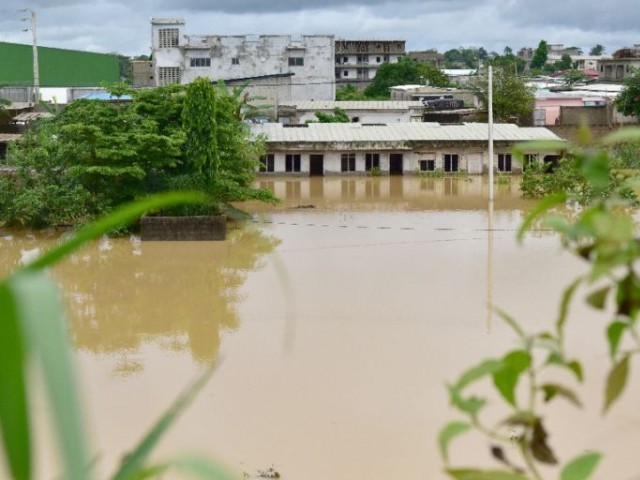 The downpour which started at 11:00 pm on Monday continued until 6:00 am on Tuesday, causing flash floods up to 2.5 metres (more than eight feet) deep.

Rescue teams saved 136 people, two people were hospitalised, and searches were under way for other casualties, he said, adding that emergency medical centres had been set up across the seaside city.

No violation of Ivorian rights in Ghana border dispute: tribunal

A city of five million, Abidjan suffers from infrastructure problems and many homes are built in flood-prone areas.

The affected areas ranged from the posh Cocody neighbourhood, where many embassies and the presidential palace are located, to the teeming working-class Yopougon neighbourhood.

“Many residents are perched on the roofs of their homes,” Fiacre Kili, the head of the civil protection agency said.

In Cocody and neighbouring Riviera, several homes were flooded and boundary walls toppled, with many cars washed away from driveways, an AFP correspondent said.

“I have never seen anything like this in my life,” said a resident, whose car was swept 600 metres from the house.

“I was sleeping upstairs. My friend who was next to me woke me up saying ‘Get up, there’s water’. I looked out of the window and saw cars and furniture being swept away on the streets,” said Ismael Oulata, a fitness coach.

“Then the water started coming up the stairs.”

Machines in the gym downstairs were out of commission and an adjoining hairdressing salon was smeared with mud.

“We lost everything,” said a pizzeria owner called Sabine, who declined to give her surname.

“When we came this morning we found all the freezers toppled and all the products were spoilt. Our five delivery scooters were damaged.”

Ivory Coast’s rainy season extends from April to October and rainfall is more abundant on the coast.

Violence flares up in Nicaragua after suspension of peace talks