Looking to the heavens

Looking to the heavens 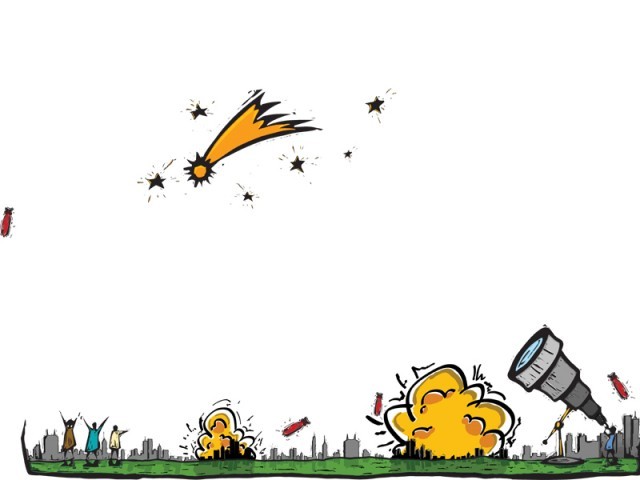 Young, educated Pakistanis are looking at heavens, not to seek help, but to appreciate the grandeur of the universe.

“We are all in the gutter, but some of us are looking at the stars.” – Oscar Wilde

It is an understatement to say that Pakistan is going through a tough time. Scores of civilians have died, and continue to die, in spates of suicide bombings. Many of the recent terrorism suspects in the world have had links to the lawless areas between Afghanistan and Pakistan. And now, with the killing of Osama Bin Laden in Abbottabad, the world’s accusatory fingers are squarely pointed at Pakistan.

But this is also a time when – of all things – amateur astronomy is blooming in Pakistan. An increasing number of young, educated Pakistanis are looking at the heavens, not necessarily to seek help, but to appreciate the grandeur of the universe.

Lahore has seen its share of terrorism in recent years. More than 3,000 lives were lost in these attacks in 2009 alone. But 2009 also marked the rise of popular astronomy in the cultural capital of Pakistan. The Khwarizmi Science Society (KSS), based in Lahore, organised its first Falakayati Mela (Astronomy Festival) at Punjab University in January 2009. The Mela invited children and adults alike to look at the sky with the help of a telescope. The turnout was spectacular: over 500 people showed up to view the majestic rings of Saturn, as well as a close-up of craters on the Moon.

The KSS was not content to open up the universe only to those living in big cities. They brought their telescopes to public schools in small towns in Punjab too. Just a week after the infamous attack on the Sri Lankan cricket team in Lahore, young astronomy enthusiasts from KSS had their telescopes setup at Government High School Number 1, in Phool Nagar, 50 km south of Lahore.

Falakayati Melas continued through 2009 and 2010 in Okara, Jehlum, Shahdara, Swabi and Lahore. At some places 500 people showed up to look at Jupiter, at other places, 1500! While the appetite for wonder was on full display here, suicide bombings also continued throughout Pakistan during this time. Lahore, Rawalpindi, Mian Channu, Peshawar, Dera Ismail Khan. The total number of people dead in these attacks, unfortunately, outnumbers those who were looking through telescopes at these Falakayati melas.

But the universe goes on.

One of the architects of the Falikyati Melas is Umair Asim. A senior vice principal at a school, he has spent his lifesavings on a telescope and an observatory at the rooftop of his house in Lahore. He is one of the leading amateur astronomers in Pakistan. He recently captured a close-up of some of the Moon’s craters, and this image was picked up as the Lunar Photo of the Day (LPOD) for April 27, 2011 – the first ever from Pakistan. One of the craters in the image, Maupertius, is 44 km in diameter. The entire city of Lahore can comfortably fit in there.

Umair and other astronomers from Lahore are not alone. There are a number of amateur astronomers in Karachi. They delight when power goes out in the city of lights – which seems to happen more than it should. Just this past year, Karachi Astronomy Society (KAS) organised an all-night astronomy session at Badro-Jabel – a dark site, located about 300 km from Karachi. This was an unprecedented gathering of Pakistani astronomers, with some joining in from as far as Lahore. Multiple telescopes were present; the star amongst them was an 18-inch Dobsonian telescope, perhaps the largest of its kind in Pakistan. Its owner, Khalid Marwat, has not only been generous in sharing the telescope, but also in imparting lessons about the night sky.

For one night, a small part of a Pakistani desert had eyes that could see and appreciate the beauty of the Orion nebula – a gas cloud that is forming new stars. This nebula is located about 1500 light years away and is lit by the light of baby stars. It wasn’t in the Orion nebula, but our own Sun was also born in a stellar nursery such as this, a few billion years ago! For a moment, however brief, the news of terrorism seemed to fade away in this cosmic context.

I have my own affinity with the bright night sky of Karachi. I was first smitten by astronomy in the early 1980’s, when Pakistan Television (PTV) aired the first episode of Carl Sagan’s Cosmos. My perspective on life and the universe was never the same. The Karachi night sky did not show many stars, but this encouraged me to imagine planets around other stars, gas clouds being consumed by hungry black holes, and strange galaxies formed “only” a few million years after the Big Bang.

Pakistan, at the time, was under the dictatorship of General Zia-ul-Haq. The history of US, Pakistan, and Afghanistan was in the process of being intertwined in ways that few imagined at the time. Oblivious to the political realities, a few of us formed an astronomical society by the name of Amastropak – The Amateurs Astronomical Society of Pakistan. In the late 1980s, a few small telescopes in Karachi would regularly scan the skies and bring the rings of Saturn into focus.

I left for the US and received my PhD in astronomy in August 2001. My thesis explored the causes for the triggering of star formation in galaxies millions of light years away. But closer to home, the next ten years would see a dramatic increase in terrorism in Pakistan. Even the shrines of Sufis would not be spared the carnage.

But at the same time we have also seen a growing interest in astronomy in Pakistan. The cause may not be easy to explain, but evidence is there for all to see. Can we build on this interest and have a program that promises small and easy-to-use telescopes all across Pakistan? “Yes to telescopes, no to guns!” Can we make astronomy our national obsession – like cricket or mangoes? Instead of being Osama Bin Laden’s hideout, can Pakistan one day be known as the nation of stargazers, that crazy country where almost everyone has seen the rings of Saturn?

Salman Hameed is assistant professor of Integrated Science & Humanities and director of the Center for the Study of Science in Muslim Societies (SSiMS) at Hampshire College, Massachusetts, USA.

Up in the mountains: Where the heart is