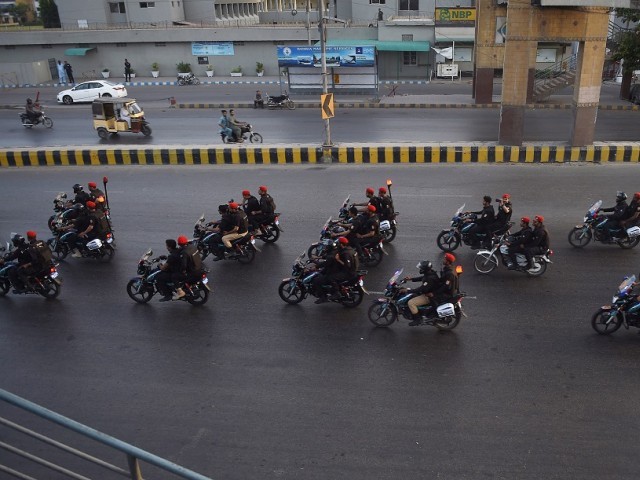 Pakistani security personnel during Muharram in Karachi on September 16, 2018. PHOTO:AFP

He issued these directions while visiting the control room which was established at the Deputy Commissioner’s office to monitor processions. He ordered that maximum facilities be provided to mourners along the procession routes. He stressed all officers and officials should remain vigilant till midnight on the 10th of Muharramul Harram while performing duties with national zeal and fervor.

The senior minister, along with Punjab Law Minister Mohammad Basharat Raja, also visited the central control room at the Punjab Civil Secretariat. The ministers were briefed about the centralised system which is attached to the Punjab Safe Cities Authority (PSCA).

Aleem Khan passed on directions to keep liaison with attached departments and media. He directed local government authorities to ensure proper cleanliness along the route of Ashura processions. He highlighted that the provincial minister was assigned duties to keep an eye on arrangements in all districts of the province.

He expressed hope that all Ashura processions would remain peaceful and there would be no untoward incident in the province.

Lahore Deputy Commissioner Capt (Retd) Anwarul Haque informed the senior minister about the arrangements of the district administration. He also gave a detailed presentation on routes of processions in Shadman, Walled City, Model Town and other areas of city. He said all departments concerned were on board and measures were in place to tackle any situation.