Invest­ors wait for clarit­y on econom­ic measur­es expect­ed to be taken by the govern­ment
By Our Correspondent
Published: September 16, 2018
Tweet Email 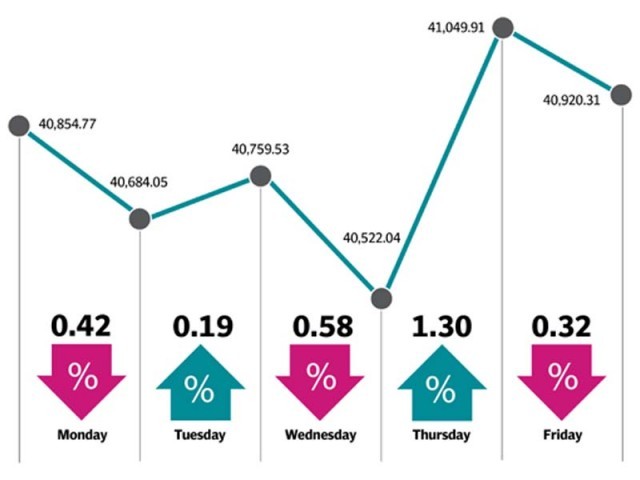 KARACHI: The stock market remained choppy in the outgoing week as lack of clarity on economic policies kept the bourse range bound with the KSE-100 index closing up by a mere 0.2% or 65 points at 40,920.

The week began on a negative note due to a buzz among investors on the possibility of gas and electricity tariff hike. However, the market recovered the next day as investors viewed favourably a news story that said the government was planning to announce a textile incentive package.

Later, the market witnessed mixed news on the economic measures to be taken by the new government.

With expectations of higher taxes and reduction in the Public Sector Development Programme (PSDP), investors awaited the new finance bill, which was due to be presented next week. It would be followed by the arrival of a staff-level team of the International Monetary Fund (IMF) in the last week of current month.

Investor participation improved as average daily volumes slightly increased by 0.2% in the outgoing week to 139 million shares while average daily traded value got better by 19% to $47 million.

In terms of sectors, positive contribution came from oil and gas exploration companies (159 points) due to increase in crude prices during the week, fertiliser companies (55 points) due to no change in gas prices, textile composite (37 points), technology and communications (31 points) and power generation and distribution (25 points).

Sector-wise, negative contribution came from commercial banks (207 points) as a result of foreign selling worth $12.1 million and automobile assemblers (35 points).

Foreign selling continued to hurt the market. Foreign investors sold a net $26.1 million worth of stocks during the week compared to selling of $9.9 million in the previous week.

Major sectors that borne the brunt of selling were commercial banks ($12.1 million) and cement companies ($8.9 million). On the domestic front, major buying was reported by insurance companies ($11.8 million) and mutual funds ($10.6 million).

Among major highlights of the week were foreign currency reserves falling $300 million, auto sales dropping 6% in two months, Economic Coordination Committee putting off a decision on gas price hike, remittances jumping 13.5% in July-August, Federal Board of Revenue collecting Rs547 billion in taxes on oil sales in fiscal year 2018, announcement of planned amendments to the finance bill, proposed imposition of ban on the import of cheese, vehicles and smartphones and making idle fertiliser plants operational.