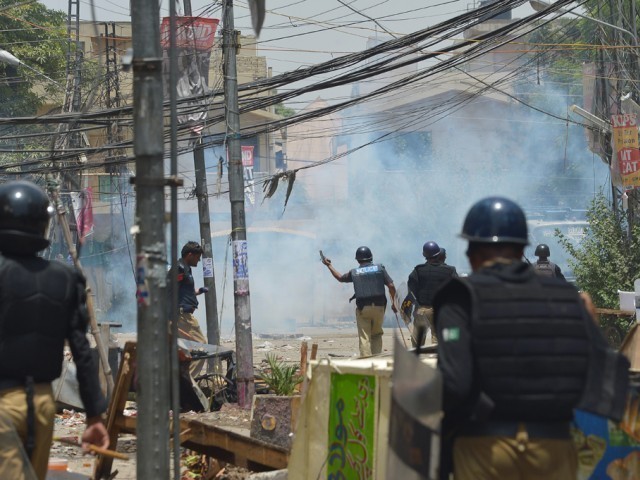 LAHORE: The case proceedings of a private complaint filed by Pakistan Awami Tehreek (PAT) over the Model Town massacre in which 14 people were killed, took a new turn when a lawyer, from defendant’s team, slapped a witness in Anti-Terrorism Court.

PAT representatives claimed that such tactics were being played just to delay and divert the attention from the actual Model Town massacre case. Nazim Awan, a lawyer from defendant’s team led by advocate Supreme Court Burhan Moazzam Malik, slapped one of the witnesses, Mohsin Rasool, during court proceedings merely to create panic among their witnesses so that they could be kept at bay from recording statements.

Moazzam’s team is defending the then DIG Operation Rana Abdul Jabbar, the then SP Tariq Aziz and the then SP CIA Umar Virq in Model Town killings case.

Moazzam claimed that the allegation had nothing to do with the reality as PAT representatives themselves did not want to run the case and they believed such an atmosphere could be created to gain political mileage. He claimed that the CCTV footage of the courtroom was available which could easily reveal the truth.

Interestingly, the lawyers defending the accused police officers claimed that Rasool (the PAT witness) used to mumble and disturb the proceedings when they were fully engrossed in either cross-examination or recording statements in the courtroom. While PAT’s representatives claimed the witness used to recite what they called “darood” in low voice and doesn’t mumble or make any noise. The lawyers said it was a courtroom where the fate of Model Town case was being decided and Rasool should go to a mosque if he wanted to recite “darood” or should recite it (darood) silently without moving his lips and disturbing the court proceedings.

PAT’s witness Rasool, in his new complaint which he filed in Anti-Terrorism Court as well as with Racecourse police station, contended that on September 13 he was present in the hearing of the court proceedings when the accused lawyer, on the direction of Burhan Moazzam, slapped him. He said it was done just to create panic amongst other witnesses so that they may refrain from recording their testimonies.

While the accused lawyer Nazim Awan, in his complaint submitted before the ATC, contended that as he entered the courtroom a PAT worker Rasool pushed him and ‘attempted to thrash him’. Later Rasool left the courtroom on the pretext of a scuffle and returned to the courtroom with 25 PAT workers who glared at them (the defendants’ lawyers) and ‘threatened with dire consequences’.

However, the court on Friday fixed September 17 to decide the fate of the two applications which both the parties submitted against each other.

They alleged police conducted ‘a politically motivated operation’ and killed their workers to stop them from raising voice against the poor performance of PML-N government. The operation was conducted merely to give a message to Dr Tahirul Qadri and to stop him from visiting Pakistan.

While senior lawyer Burhan Moazzam Malik, defending the then top police officers, claimed PAT only recorded 20 prosecution witnesses out of total 127 which actually meant that PAT does not want to take the case to its conclusion merely to gain political mileage.