We're defini­tely rootin­g for this one!
By Entertainment Desk
Published: September 12, 2018
Tweet Email 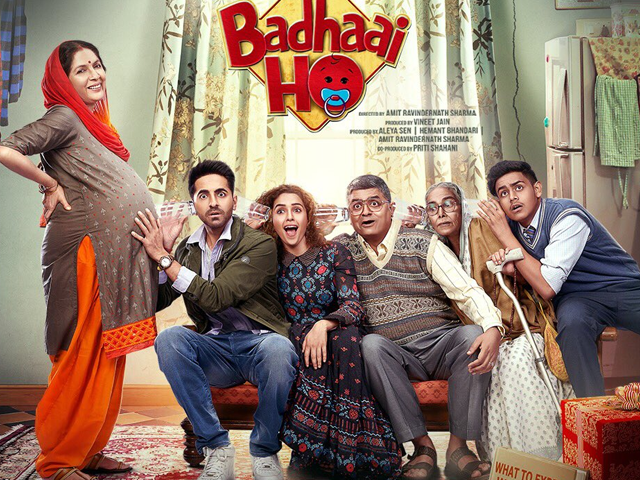 The trailer of the Ayushmann Khurrana and Sanya Malhotra-starrer Badhaai Ho is finally out and it looks intriguing to say the least. The clip begins with Nakul’s (Ayushmann) father (Gajraj Rao) awkwardly breaking the news of his wife’s (Neena Gupta) accidental pregnancy to his two sons, Nakul being the elder one.

Nakul – who seems of marriageable age himself – is still struggling to come to terms with the fact that his mum is expecting when he spills the news to his girlfriend (Sanya).

The trailer perfectly captures the uneasiness amongst desis when it comes to ‘taboo’ topics such as pregnancy and sex education. In an earlier interview, 33-year-old Khurrana explained his reason to star in such informative films. “As I go by my instinct, this was one of the films that I wanted to be a part of because of the story. I felt the same during Dum Laga Ke Haisha when I took no time to agree to do the film. I think such a quirky subject and story-driven films are my zone,” he said.

“I think I would react like the way my character in the film reacted because it is really awkward and embarrassing to know that at the age of 50 our parents are becoming parents again,” he continued.

The rest of the trailer gives us glimpses of the fun, mad roller-coaster ride that the film is going to be. While this is the first Bollywood film about old-age pregnancy, Hollywood’s Father of the Bride 2 touched upon a similar theme.

The writers of the film, Shantanu Srivastava, Akshat Ghildial and Jyoti Kapoor have done a stellar job with witty dialogues. Director Amit Ravindernath Sharma has ensured that a topic usually slipped under the carpet, is brought to the fore in a humourous yet engaging manner.

Not only did Ayushmann and Sanya’s fans go berserk following the release of the trailer, but B-Town celebs were quick to praise it too.

Legendary scriptwriter-lyricist Javed Akhtar tweeted, “Badhaai ho!! If this film is one fourth as interesting as its promo , then we are going to watch an extremely interesting film . All I have to say to the cast crew and the producers is Badhaai ho!!”

Badhai ho !! If this film is one fourth as interesting as it’s promo , then we are going to watch an extremely interesting film . All I have to say to the cast crew and the producers is Badhai ho !!

Starlet Anushka Sharma lauded the subject being addressed in the film and wrote, “What a concept and trailer. Blew it out of the park! Can’t wait to watch.”