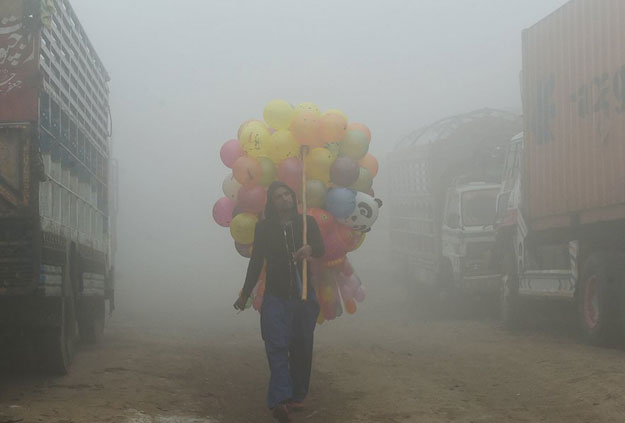 A Pakistani vendor carries balloons on a street amid heavy smog in Lahore. PHOTO: AFP

LAHORE: A crackdown will be launched against those causing air and environmental pollution (burning of crop stubble, garbage, and industrial, vehicular emissions) as part of Punjab government’s efforts to combat smog.

This was decided in a meeting chaired by Punjab Chief Secretary Akbar Durrani at the Civil Secretariat on Tuesday.

Under Section 144, the burning of crop residue and garbage would be banned and coal-fired brick kilns closed from October to December.

Addressing the meeting, the chief secretary said immediate measures are being taken to combat the looming threat of smog this year. He said in order to mitigate the factors behind smog, there is a need to adopt preventive measure and increase awareness.

He added that the government is prohibiting the use of substandard fuel in factories and there would also be a ban on the burning of crop stubble and garbage.

He directed all relevant departments to strictly implement the instructions on smog control. He remarked that no negligence would be tolerated and controlling environmental pollution is a service to humanity.

He said that the environment department had also banned construction of new brick kilns having the BTK technology. He said the ZigZag brick kilns would be allowed as they would reduce environmental pollution by 70% and use of coal by 30%.

He maintained that a team of Nepali experts has been invited to Pakistan to make brick kilns owner aware of ZigZag technology and this team is conducting awareness workshops in different cities. He said that so far, 178 steel mills and 36 brick kilns have been shut down for causing air pollution. At the same time, 23 steel mills have installed dry scrubbers (equipment to control pollution).