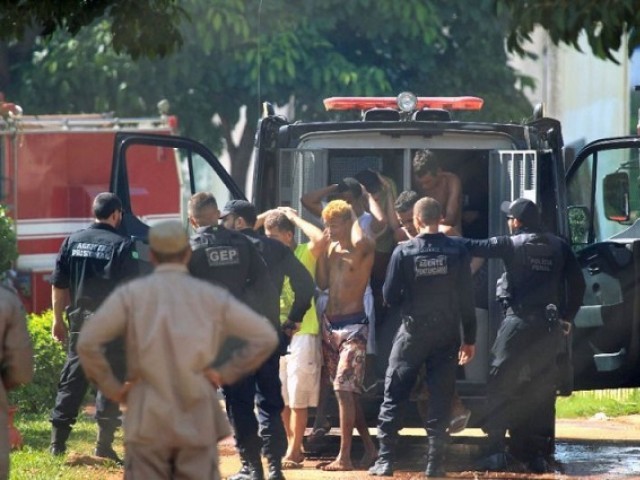 Guards escort inmates back to the "Coronel Odenir Guimaraes" State Prison Goias, Brazil in January this year; Brazil has the third largest prison population in the world. PHOTO: AFP

Officials said the assault was carried out by about 20 men in four vehicles, who fired on watchtowers and used explosives to destroy the front gate of the Romeu Goncalves Abrantes prison.

The prison, a maximum security facility with 680 inmates, is located in Joao Pessoa, the capital of Paraiba state.

“Heavily armed men knocked down the main gate after an exchange of fire with police and penitentiary agents,” the state’s secretariat for prisons said.

Hindu prisoners fast along with Muslims in Indian jail

By midday, 41 of the 105 escaped prisoners had been recaptured as security forces locked down the state capital, closing schools and medical centers as a precaution.

Brazil’s has the world’s third largest prison population, with 726,712 inmates as of June 2016, according to official statistics.

The population is double the capacity of the nation’s prisons, which in 2016 was estimated to be 368,049 inmates.

Along with severe over-crowding, Brazil’s prisons are plagued by gang violence.