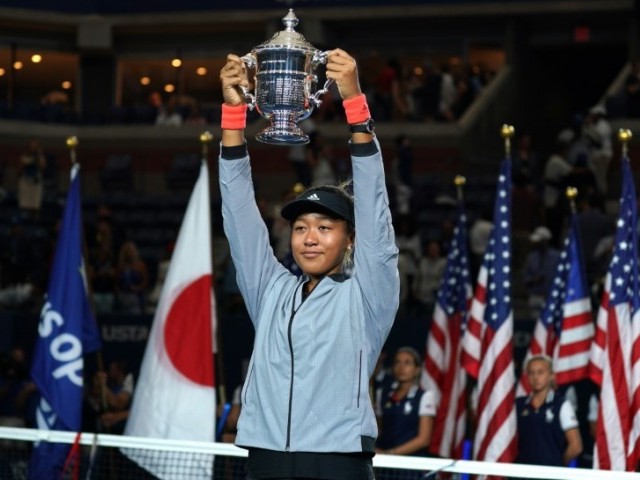 TOKYO: Japan on Sunday hailed Naomi Osaka’s stunning upset against the legendary Serena Williams to win the US Open, giving the nation some rare good news after a summer of deadly natural disasters.

Prime Minister Shinzo Abe led the praise, taking to Twitter to congratulate Osaka after her 6-2, 6-4 win in New York.

“Congratulations on your victory at the US Open. The first Japanese player to win a Grand Slam title. Thank you for giving energy and inspiration to the whole of Japan,” the premier tweeted.

Abe was on his way to the northern island of Hokkaido where a massive earthquake last week sparked landslides that buried houses in a rural town, killing at least 35 people and injuring hundreds of others.

Osaka’s grandfather Tetsuo Osaka, 73, lives in Hokkaido and said he wept watching his granddaughter on television.

“It still hasn’t sunk in for me yet. The moment she won, my wife and I rejoiced together. I was so happy, I cried,” he told public broadcaster NHK. “I hope she stays healthy and continues her good work. I also hope she wins at the Tokyo Olympics (in 2020),” he said.

Fellow tennis star Kei Nishikori flooded Twitter with emojis of trophies, thumbs up and Japanese flags, followed by a simple tweet of “proud” alongside a Japanese flag.

And Tsuyoshi Fukui, a former top Japanese player and now senior official at the Japanese Tennis Association, said Osaka’s performance would help to cheer the country up after typhoons, floods and earthquakes dominated the headlines this summer.

Osaka’s “tenacious and patient performance … must have been a great show of encouragement to those Japanese people who saw damage from such things as typhoons and earthquakes,” Fukui told Japanese media.

Meanwhile, NHK took a break from its round-the-clock coverage of the disaster to turn to happier news.

Sports Nippon newspaper said Osaka had achieved a “complete victory” against an “irritated Serena who broke her racket”.

The Asahi Shimbun daily said on Twitter it would be printing an extra edition and distributing it in Tokyo.