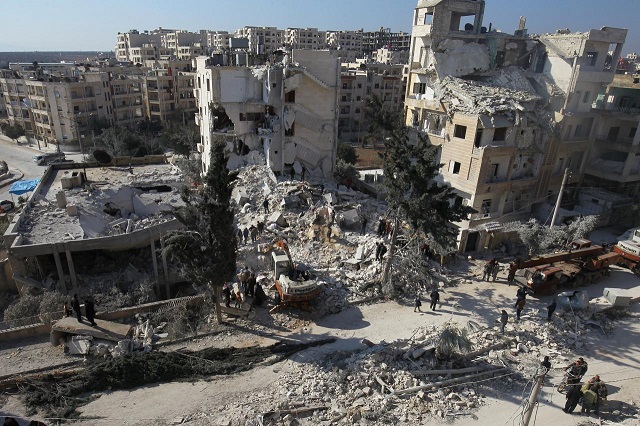 People inspect the damage at a site hit by airstrikes in the rebel-held city of Idlib. PHOTO: REUTERS

AL MUNTAR: Syria’s last major militant bastion Idlib was Saturday targeted by the “most violent” Russian air strikes in a month, a monitor said, after the failure of a three-way summit on the Syrian conflict.

The renewed strikes came a day after the leaders of militant backer Turkey and regime allies Russia and Iran failed at the summit in Tehran to agree on how to stave off a threatened offensive on the northwestern province of Idlib.

Aid organisations have warned that any military campaign to retake the region of nearly three million people on the Turkish border could spark one of the worst humanitarian disasters in Syria’s seven-year war.

At least nine civilians including two children were killed in the strikes and as dozens of barrel bombs were dropped by regime aircraft, the Britain-based monitor said.

An AFP correspondent in the southern village of Al Muntar saw huge clouds of grey smoke billow up above olive trees after a barrel bombing.

Women and children ran terrified across nearby fields, one woman appearing to clutch a baby in a blanket. An elderly man sat out of breath, barefoot and dazed in the red earth, his walking cane by his side.

An underground hospital located in the province’s Hass area was hit by an air strike, damaging the building and equipment, an AFP correspondent said.

“We’ve had non-stop air raids since the morning,” said Abu Hussein, originaly a resident of Hama province to the south before he found refuge near the Idlib village of Al Abdine.

“Barrel bombs dropped by helicopters crashed close to us,” he told AFP.

The raids prompted hundreds of families to take to the roads, as dozens of cars and trucks tried to ferry civilians away from the bombardment.

Observatory head Rami Abdel Rahman said the raids targeted militant positions, some of which were empty and others in use

It was the heaviest bombardment since August 10, when at least 53 civilians were killed in Idlib and the neighbouring province of Aleppo, he said.

The United Nations has warned that any offensive could force up to 800,000 people to flee their homes and urged key power-brokers to avoid a ‘bloodbath’.

On Friday, Turkey’s President Recep Tayyip Erdogan openly disagreed with his Russian counterpart Vladimir Putin at a press conference in the Iranian capital.

Erdogan called for a ‘truce’, while Russia’s president said Damascus “has a right and must eventually take under control all of its national territory”.

Syrian President Bashar al Assad’s regime has upped its rhetoric on retaking control of Idlib and surrounding areas over the past month.
The threat comes after it recaptured areas around the capital Damascus and in southern Syria earlier this year, through a combination of deadly bombardment and surrender deals.

US has seen evidence of Syria preparing chemical weapons in Idlib: envoy

Idlib’s provincial health chief Munzer al Khalil warned Saturday that a large-scale military operation could result in “the most catastrophic crisis in our war”.

More than 350,000 people have been killed and millions displaced since Syria’s civil war started in 2011 with the brutal repression of anti-Assad protests.

Elsewhere on Saturday, clashes between Kurdish forces and regime fighters in the divided northeastern city of Qamishli killed 20 combatants, including 13 regime personnel, the Observatory said, updating an earlier toll.

Kurdish forces control most of Qamishli, but the regime and allied militiamen hold part of the city and its airport.

The Observatory said shooting broke out when Kurdish security forces at a checkpoint demanded that regime fighters step out of their patrol vehicle but they refused.

The Kurdish forces said they had retaliated to regime fire.

With US-led support, Syria’s Kurds played a key role in the war against the Islamic State group, during which they seized large swathes of northern and northeastern Syria.

The Damascus regime has vowed to reintegrate the Kurdish-held areas, by force if necessary. In late July, it opened talks with the Kurdish-led Syrian Democratic Forces.