'Turkey will not watch from the sideli­nes any killin­gs benefi­ting Syrian agenda', warns Erdoga­n
By Reuters
Published: September 8, 2018
Tweet Email 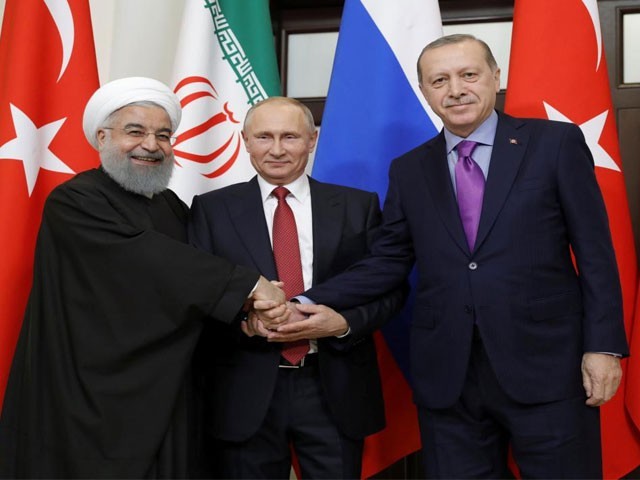 TEHRAN: The presidents of Turkey, Iran and Russia on Friday failed to agree on a ceasefire that would forestall a Syrian government offensive in the militant-held Idlib province.

Turkey’s Tayyip Erdogan, Russia’s Vladimir Putin and Iran’s Hassan Rouhani, meeting in Tehran for a summit of key foreign players in Syria’s war, agreed in a final statement that there could be no military solution to the conflict and it could only end through a negotiated political process.

But as Syrian government and Russian warplanes mounted air strikes in Idlib on Friday morning in a possible prelude to a full-scale offensive, Putin and Rouhani pushed back against Erdogan’s call for a truce.

The Turkish leader said he feared a massacre and Turkey could not accommodate any more refugees flooding over its border.

In a series of tweets following a trilateral summit with the leaders of Russia and Iran in Tehran, Erdogan said resorting to methods that would disregard civilian lives would “play into the hands of terrorists.”

“If the world turns a blind eye to the killing of tens of thousands of innocent people to further the regime’s interests, we will neither watch from the sidelines nor participate in such a game,” Erdogan said.