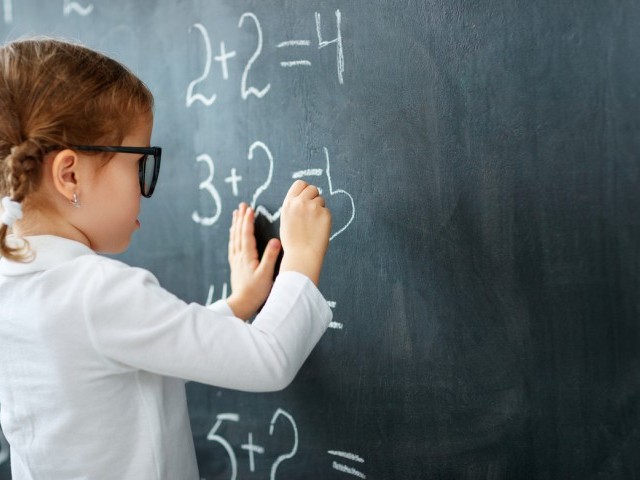 Peschool girl with book near school board blackboard. PHOTO: REUTERS

KARACHI: The Sindh government has launched an inquiry into alleged corruption of millions of rupees by non-governmental organisations (NGOs), which had allegedly been running schools only on paper.

The inquiry, launched by the Anti-Corruption Establishment follows the discovery of 52 public schools being run by the NGOs only on paper. The fraud was initially discovered by the Sindh Edcuation Department, whose managing director, Naheed Durrani, then wrote to the ACE chairperson, requesting for action to be taken against the 19 NGOs who had entered into a partnership with the provincial government and signed contracts to run the schools. It was later discovered that the said NGOs had received millions of rupees in funds but had not even established the schools in the designated areas.

In her letter to the ACE chairperson, Durrani termed the fraudulent activity a ‘breach of trust’ and requested his department to track the defaulters and recover public money from them. The schools in question were meant to be set up in Karachi, Hyderabad, Larkana, Dadu, Tharparkar, Sanghar and Mirpurkhas districts

SEF – a statutory organisation, works under the public-private partnership model with individuals and organisations for the provision of quality education to underprivileged communities in Sindh.

In her complaint against the NGOs, Durrani said, “Through a proper selection procedure, we entered into partnership with various organisations, some of whom are absconders. These organisations could not establish schools as per legal parameters and failed to return the funds. They are guilty of criminal breach of trust.” She added that several notices were served to the said NGOs, but no tangible results had been gleaned thus far.

According to education department officials, each of these NGOs has been given different amounts ranging from Rs0.2 million to Rs9.9 million between fiscal years 2015 and 2017, with the total figure amounting to millions of rupees. The NGOs, which inked the agreement to establish the schools and have now bungled the funds include the Transformation and Reflection for Rural Development (TRD), which is based in Hyderabad, Serve Foundation in Kamber Shahdadkot district, Indus Women Culture Development and Women Organisation in Kotri and the Roots Work Foundation, Hyderabad. The inquiry also names the individuals to whom the funds were released.

The Indus Women Culture Development Welfare Organisation, for example, was given a grant of Rs9.9 million to establish two schools in Kotri in May 2016, but it failed to do so. ACE recently issued notice to the organisation saying, “During the course of inquiry, it has been revealed that you got the amount to establish and run schools in Village Baloch Colony and Village Mehrem UC Kotri. However, you neither fulfilled the government requirement nor returned the amount. You are required to appear before ACE on September 14.”

Speaking to media personnel, adviser to the chief minister on anti-corruption Barrister Murtaza Wahab said that he had ordered to initiate strict action against the said organisations. “There will be zero tolerance and we will recover public funds from these organisations,” said Wahab, adding that he would bring drastic reforms in ACE and expedite the pending cases to retrieve public money.

Meanwhile, the ACE deputy director, Zameer Abbasi, who is investigating the case, said that they have sought permission from the chief secretary to arrest the defaulters and recover the money.

Despite several attempts, none of the staff working in the accused organisations were wiling to speak about the allegations. One executive director of a defaulter organization, who requested not to be named, said, “We have valid reasons for it which will be presented before ACE.”

Centre of Autism Rehabilitation and Training opens in Karachi