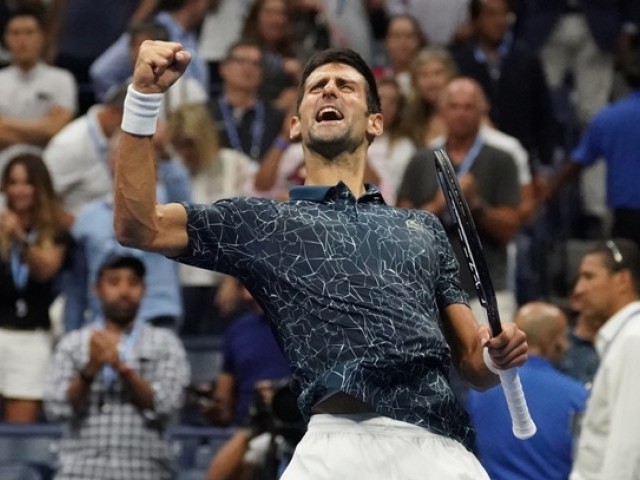 Serbia's Novak Djokovic reacts after his win against Japan's Kei Nishikori during the Men's Singles Semi-Finals match at the 2018 US Open at the USTA Billie Jean King National Tennis Center in New York on September 7, 2018. PHOTO: AFP

NEW YORK CITY: Novak Djokovic hailed Juan Martin del Potro as a “gentle giant” but he’ll have no hesitation in attempting to cut his close friend down to size in Sunday’s US Open final.

Djokovic, the 2011 and 2015 champion, will be looking to complete the Wimbledon-US Open double for a third time when he tackles the 2009 winner in New York with a 14th major within touching distance.

And he will start the heavy favourite, boasting a 14-4 record over the Argentine who will be playing in just his second final at the Slams.

Djokovic will be in his 23rd championship match at the majors and eighth in New York.

But whatever the outcome on Sunday, Djokovic insists their personal bond will remain strong.

“He’s a gentle giant,” the 31-year-old Serb said of the 6ft 6in (1.98m) Del Potro affectionately dubbed the “Tower of Tandil” after his home town.

“He really is. He’s very tall, has a big game, but at the same time he nurtures the right values in life. He cares about his family. He cares about his friends. He respects everyone. He fights every match from the first to the last point. I think people can relate to that and appreciate what he brings to the tennis.”

While Djokovic can pull level with Pete Sampras on 14 majors — and move to within three of Rafael Nadal and six back from Roger Federer — Del Potro’s career at the Slams has been torpedoed by a series of wrist injuries.

A number of surgeries pushed him to the brink of retirement in 2015 when his world ranking slumped to 581 in the world. Now he goes into Sunday’s final at a career-high three.

“We all felt for his struggles with injuries that kept him away from the tour for two, three years. But he was always a top five player in the eyes I think of everyone.”

But Djokovic will not under-estimate the 29-year-old who was two sets to love ahead of Nadal in the semi-finals on Friday when the world number one retired with a knee injury.