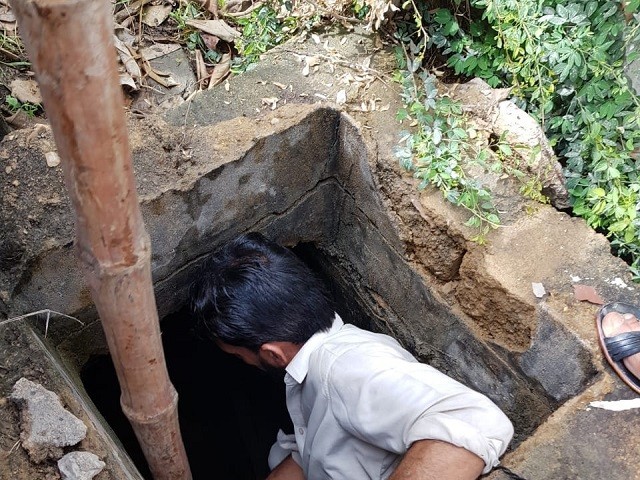 KARACHI  : A three-to-four days old dog’s bloated carcass was retreived from an underground water tank at Sakhi Hassan Water hydrant on Saturday. Water from this pump is mostly supplied to the areas of District Central.

According to Karachi Water and Sewage Board’s (KWSB) spokesperson, Rizwan Ahmed, the dog fell inside the tank early in the morning and after a few hours, workers at the hydrant fetched out its body. “The tank was properly washed after it was emptied,” he claimed.

The dog which was retrieved had his eyes popped out, tongue swelled up and protruding outside his mouth, with the entire body swelled up and skin shredded in several places. According to a water researcher at Agha Khan University Hospital, Hassan Nawaz, the body by no means seemed hours old. “It’s surely a three-to-four days old animal carcass,” he said.

Local Government Minister Saeed Ghani has ordered an inquiry into the matter and assured that he will take action against the staff responsible for the incident. “After cleaning the tank, water supply has been resumed,” said KWSB Managing Director Khalid Sheikh. According to a press statement from KWSB, a high-level inquiry team has been constituted to look into the matter.

An official of the Sakhi Hassan water hydrant told The Express Tribune that it wasn’t the water hydrant where the dog’s body was found. “It is basically a water pump adjacent to the hydrant,” the official said adding that the tank of that pump is some 90-feet-long, 30-feet-wide which can store around 0.5 million gallons of water.

At around 12:30pm, the official said that the staff at the pump found the dog’s body floating inside the tank. He explained that there were small openings in the tank covered with grills, from where they could see the dog, but as it was rotating, they couldn’t fetch out his body. “We immediately wasted some 0.3 million gallon water,” he said adding that then one of the drivers of the water tanker went inside the tank, which still had some seven-feet deep water, and brought out the dog’s body.

When The Express Tribune visited the water tank, the few openings of the underground tank were covered either by a rickety wood plank or some cardboard. Several dogs were roaming around. A security guard at the water pump told The Express Tribune that a few weeks back a female dog gave birth to few puppies that could have easily fallen inside the tank.  The official at the hydrant added that there was a possibility that the dog fell in any of their other reservoirs.

According to Nawaz, there are severe health hazards for the consumers of this water. The water now, he said, can have coliform units, which can cause diarrhoea, typhoid among several other diseases. “Ideally the KWSB should immediately conduct biological water quality tests,” he said adding that if the water board isn’t doing its job then residents should do it.

“At least, they should boil the water properly before using it,” he said. However, the KWSB official said that they chlorinated the water with 60 litres of chlorine.